New England has only one national park, Acadia National Park. While beautiful and well worth a visit, Acadia is certainly not the only option if you want to get away for an afternoon or a weekend. Connecticut, Maine, Massachusetts, New Hampshire, Rhode Island, and Vermont are each filled with diverse and beautiful state parks where you can hike along northern stretches of the Appalachian Trail, savor lake-filled landscapes carved by glaciers, fish in plentiful streams, or stroll through leafy, autumn-hued forests. Many of them are also blissfully quiet for much of the year. 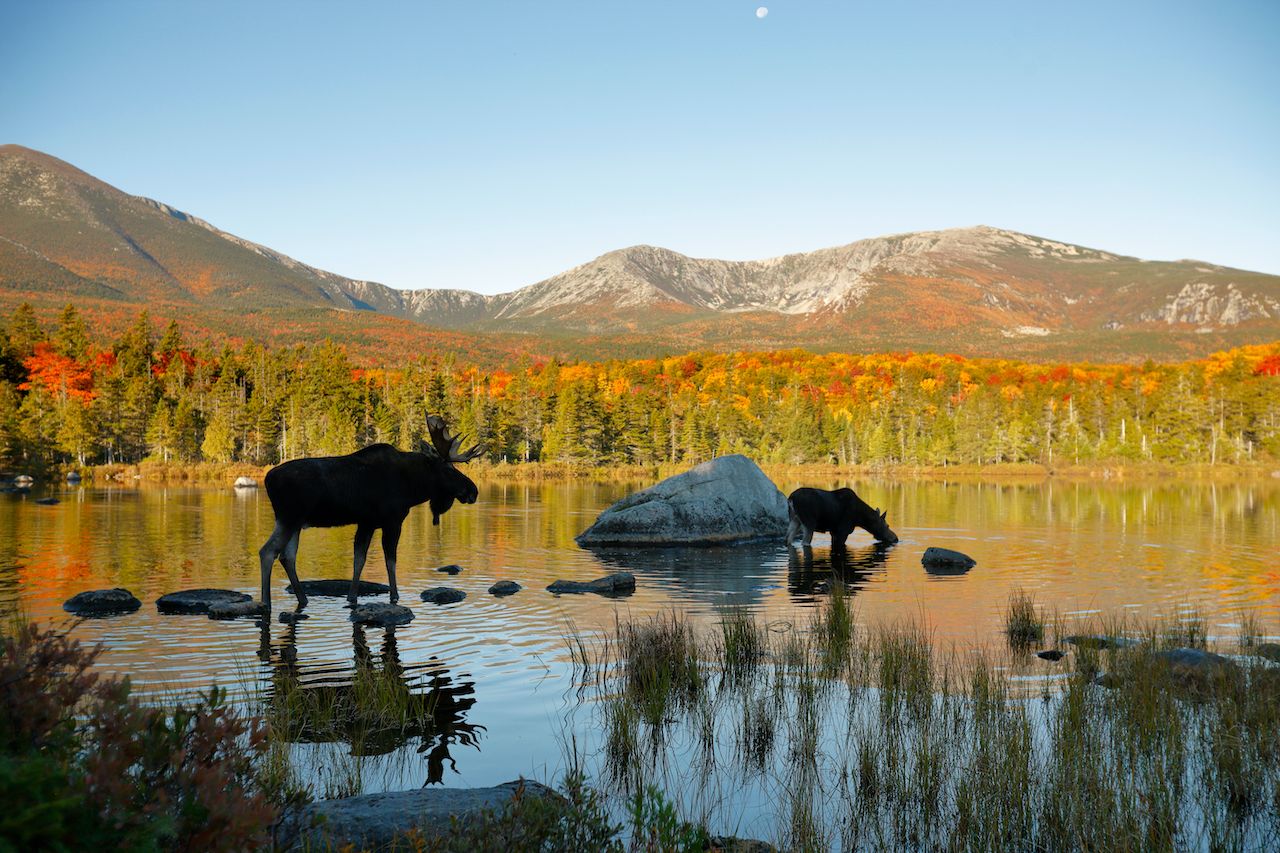 Although Baxter State Park is Maine’s most popular state park, it’s far less visited than Acadia National Park. In fact, this nearly 210,000-acre state park is more than four times bigger than Acadia but gets a mere two percent of the number of visitors. So, yes, Baxter is empty.

But what makes Baxter special is not the lack of crowds. It’s things like some of the best hiking in the Northeast, like creeping along the knife edge to Baxter Peak, the tallest peak on the 5,268-foot-high Mount Katahdin, Maine’s tallest mountain and the northern end of the Appalachian Trail. Besides hiking on some of 215 miles of trails, and perhaps spotting moose or white-tailed deer, adventurers can rock climb and mountain bike. Anyone looking for a calmer experience will appreciate fishing, canoeing, or biking on the park’s collection lakes and ponds. And if you want to stay the night? You’ll have 337 campsites to choose from. 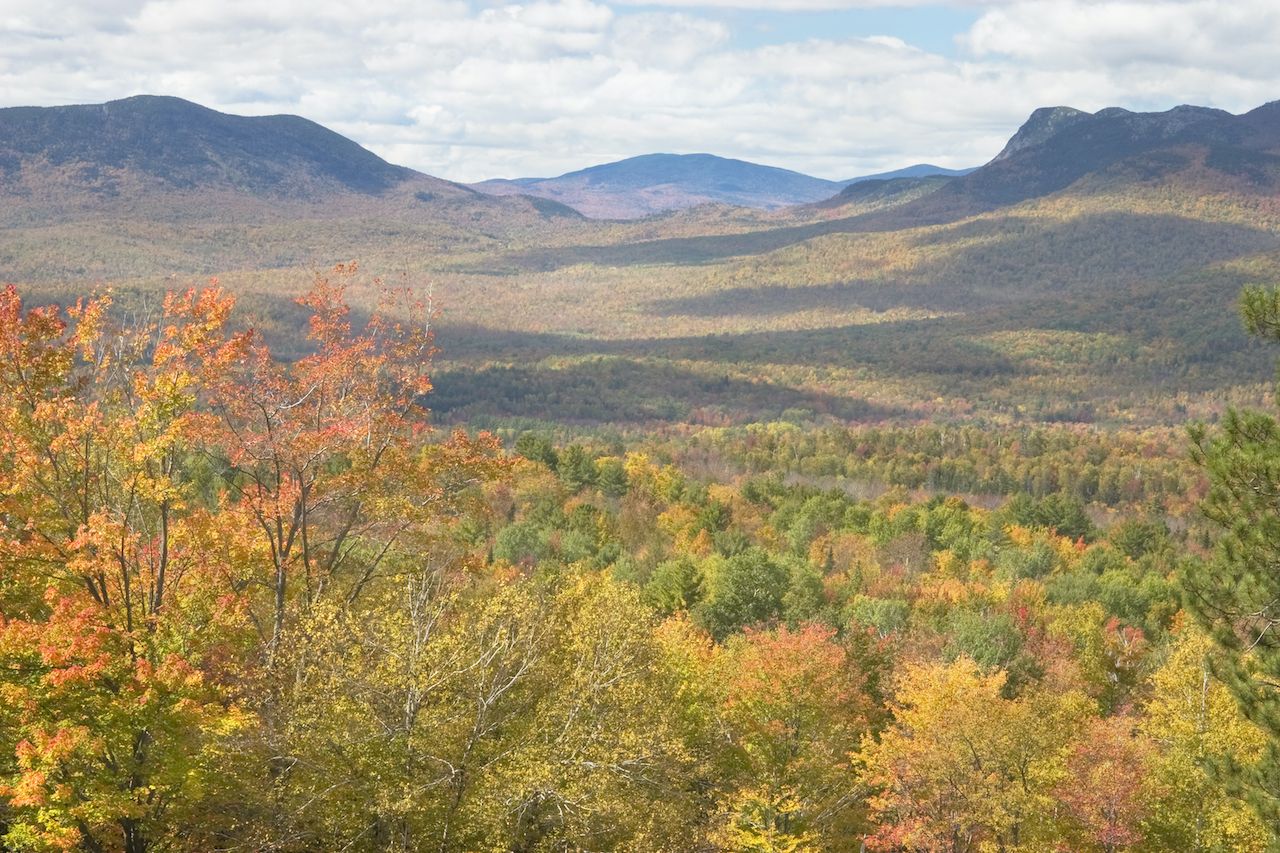 At 8,000 acres, Maine’s second-biggest state park is considerably smaller than Baxter but is plenty spacious for a state park. Within those acres are the 3,187-foot-high Mount Blue, which you can climb to in a moderate 3.2-mile loop. Up top, you’ll get views of the park’s Webb Lake, a top spot for boating, canoeing, and stand-up paddling. Fishing for trout, salmon, and bass is also popular here. Horseback riding and mountain biking trails beckon in warmer months while snowshoeing, cross-country skiing, snowmobiling, and ice skating are excellent winter options. Those planning on staying overnight can reserve a campsite. 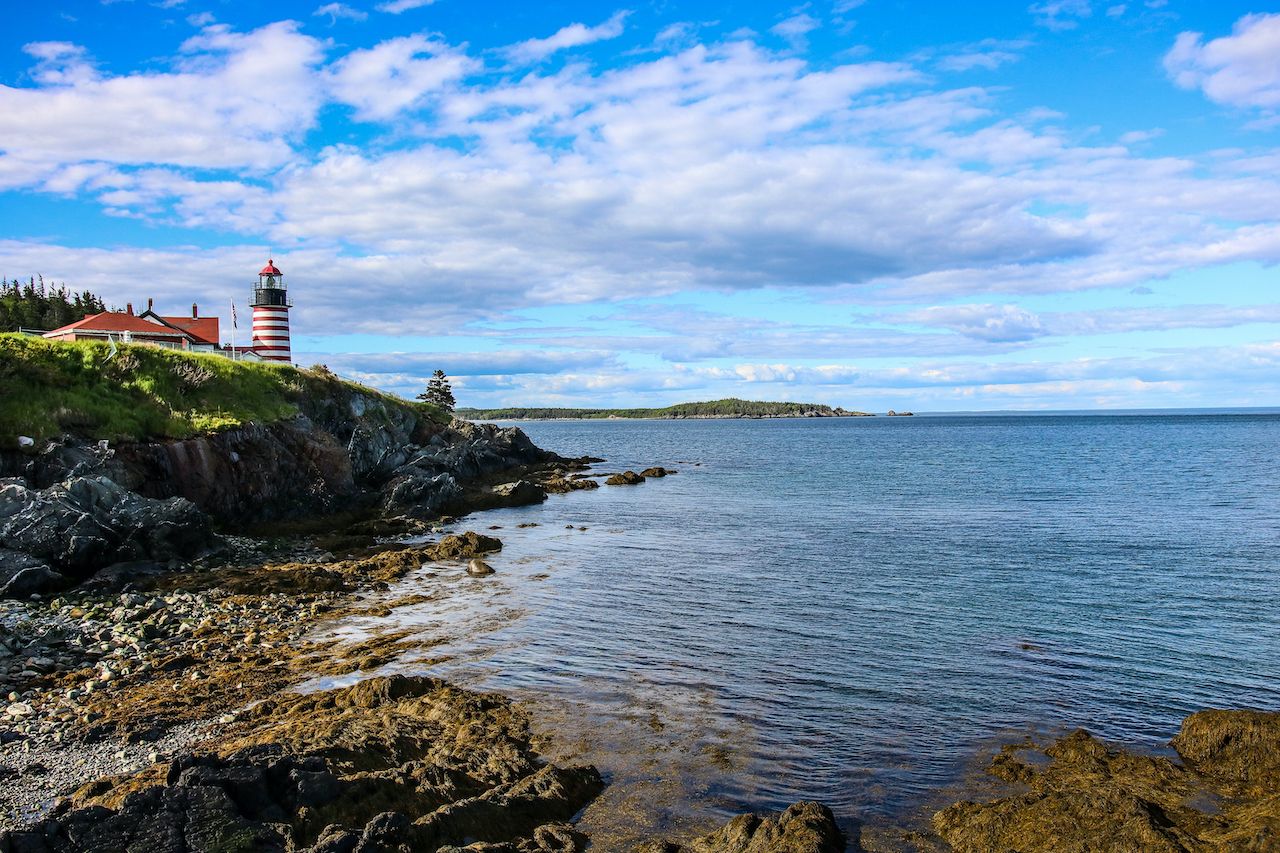 With its candy-cane stripes, the easternmost lighthouse in the US is hard to miss. While the lighthouse is the most noticeable feature of this small, coastal treasure, the park’s real rewards lie in its trails that take you through forests of evergreen pines and alongside cliffs that reach as high as 150 feet. You can look out from the bluffs for humpback and finback whales, as well as birds ranging from plover and gannet to sea ducks and sandpipers. Often wrapped in fog, Quoddy Head is also home to one of the few peat bogs in the US. 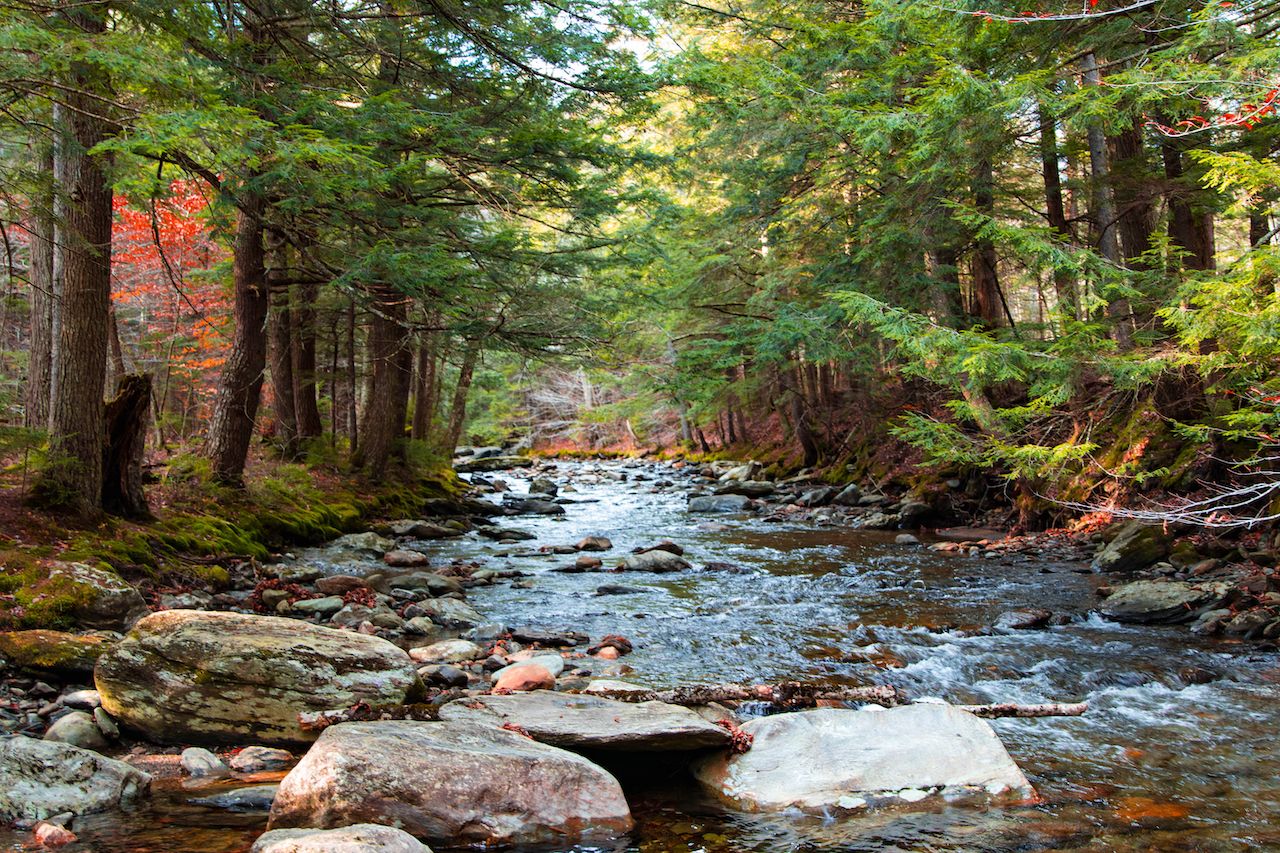 The park in Vermont’s Green Mountains is not only in a stunning location, but its name also belies an intriguing history. Located just 40 miles from the national border, near Stowe, Smuggler’s Notch was a pass-through point for goods smuggled between Vermont and Canada after the US passed the 1806 Embargo Act. It was part of the underground railroad, which helped escaped slaves find freedom in Canada. Later still, it functioned as a way-point for alcohol smuggled in from Canada during Prohibition. Today, more benign activities include hiking, biking, bouldering, or exploring some of the caves nature built into the granite peaks. Should you opt to stay overnight, Smugglers Notch is also our favorite place to camp in Vermont. 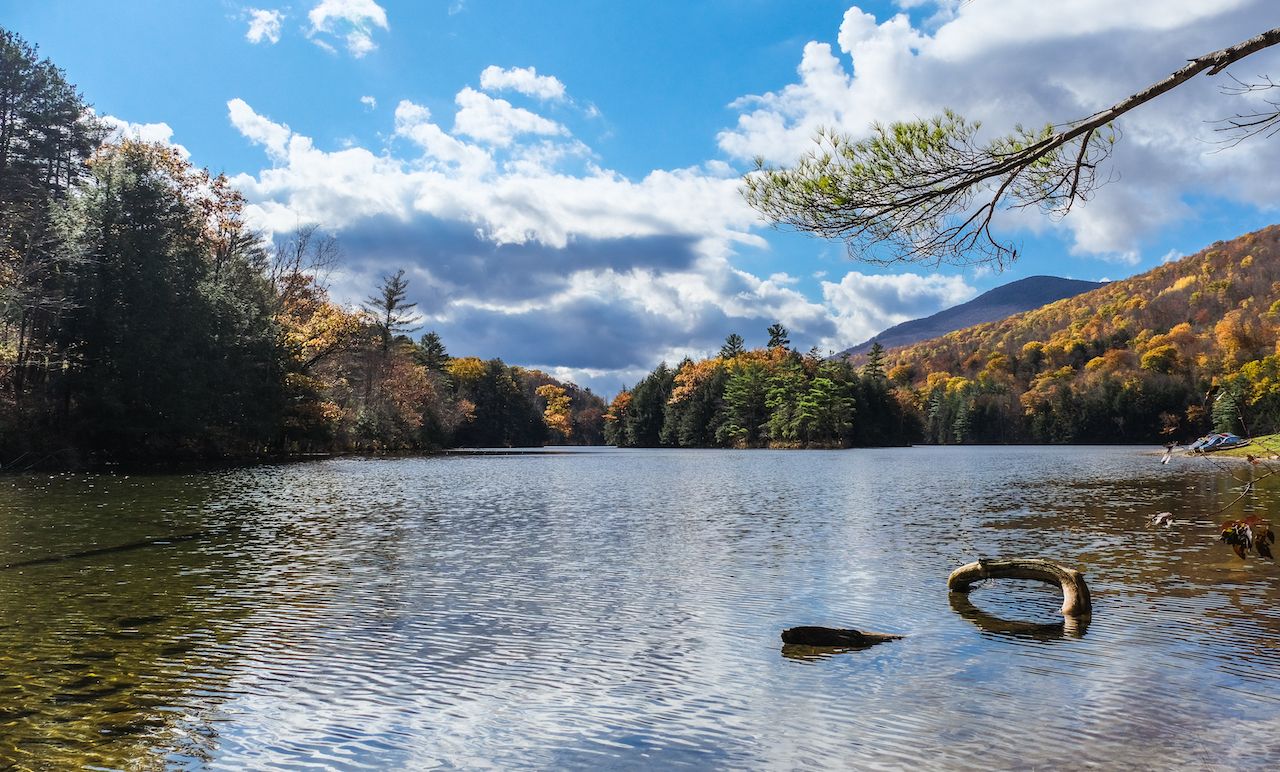 Named for its sometimes green-hued lake, this park is a hidden wonder located in a valley between the Green Mountain and Taconic ranges. Only non-motorized boats are welcome here, adding to the peaceful feel. Anglers take in pike, perch, and bass while stand-up paddlers take in the views of nearby peaks like Dorset Mountain. You can hike up to Dorset, as well as along the northern edges of the nearby Appalachian Trail. Should you choose to stay the night, over 100 campsites surround the 20-acre lake. 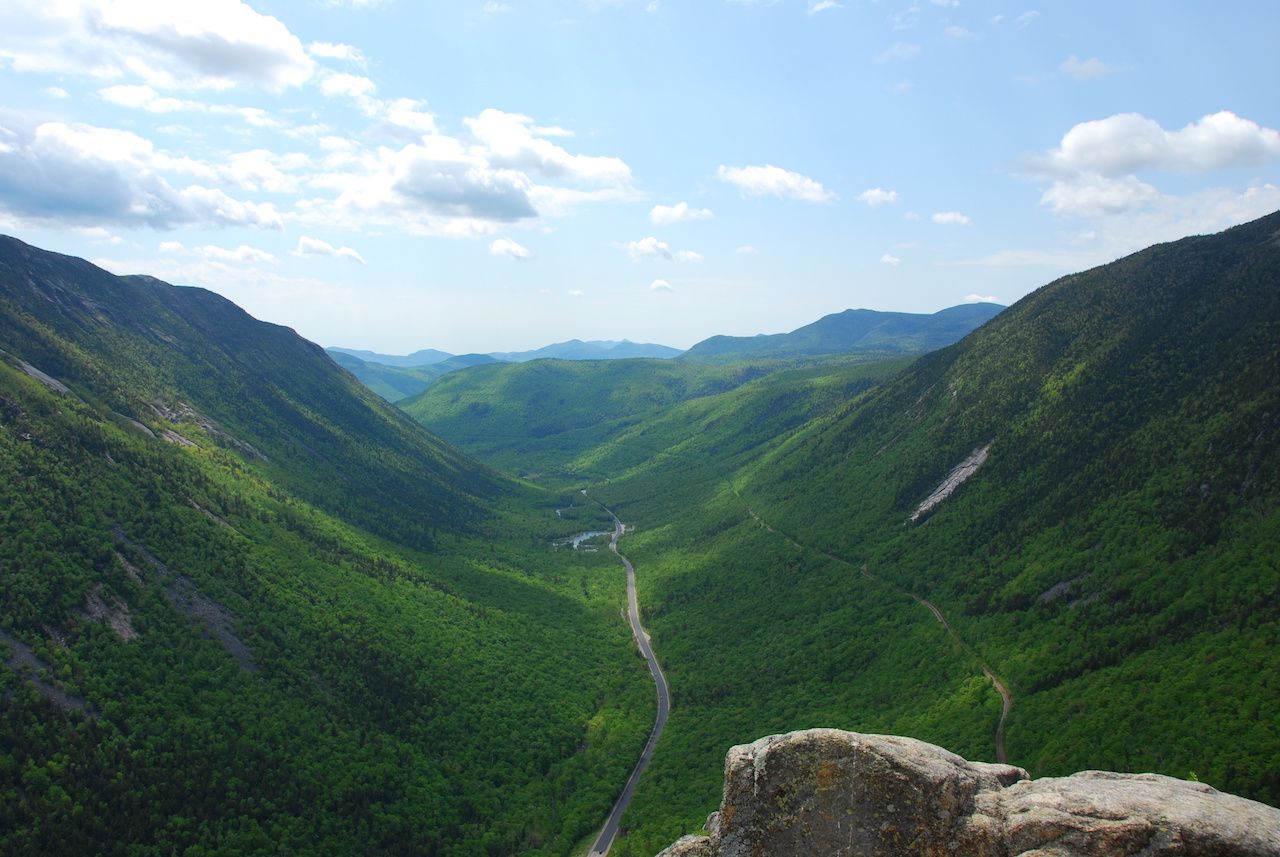 You may think that New Hampshire’s White Mountains are so named because of their wintertime blankets of snow. Two competing theories are that European settlers were impressed with how some of the mountain’s exposed granite peaks shone in the sun or that the white refers to the pale bark of the area’s ubiquitous birch trees. In any case, in summer the White Mountains are anything by white. They’re in fact bursting with green leaves, crossed by rivers, and dotted with deep blue lakes. One of the loveliest state parks in this special region is the 5,800-acre Crawford Notch State Park. Highlights of hiking or mountain biking in this park tend to be arriving at one of 10 waterfalls that cascade over rock faces. Crawford Notch is also our choice for camping in the state. 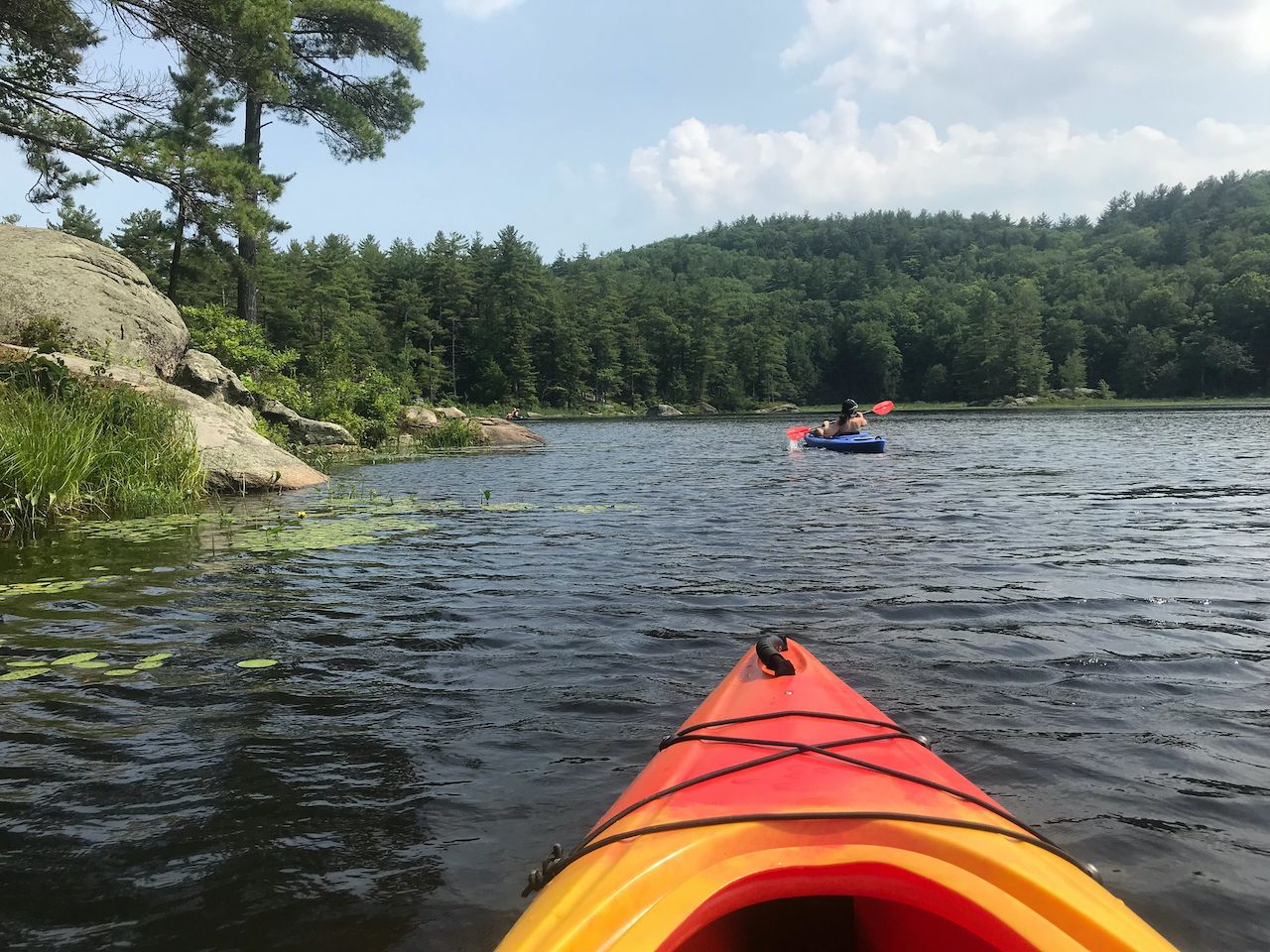 The biggest draw at Pawtuckaway is its sprawling Pawtuckaway Lake, complete with inlets and coves to explore by canoe, kayak, or stand-up paddleboards, all of which you can rent by the lake. But the 5,000-acre park is also home to the Pawtuckaway Mountains and several beautiful trails leading to such destinations of diminutive Round Pond and other, even smaller bodies of water. The glacier-carved area also has a big marsh where you’re likely to spot beavers, herons, and deer. While warm weekends may see people out on Pawtuckaway Lake, this park, one of New Hampshire’s largest state parks, is blissfully quiet most weekdays — even in summer. 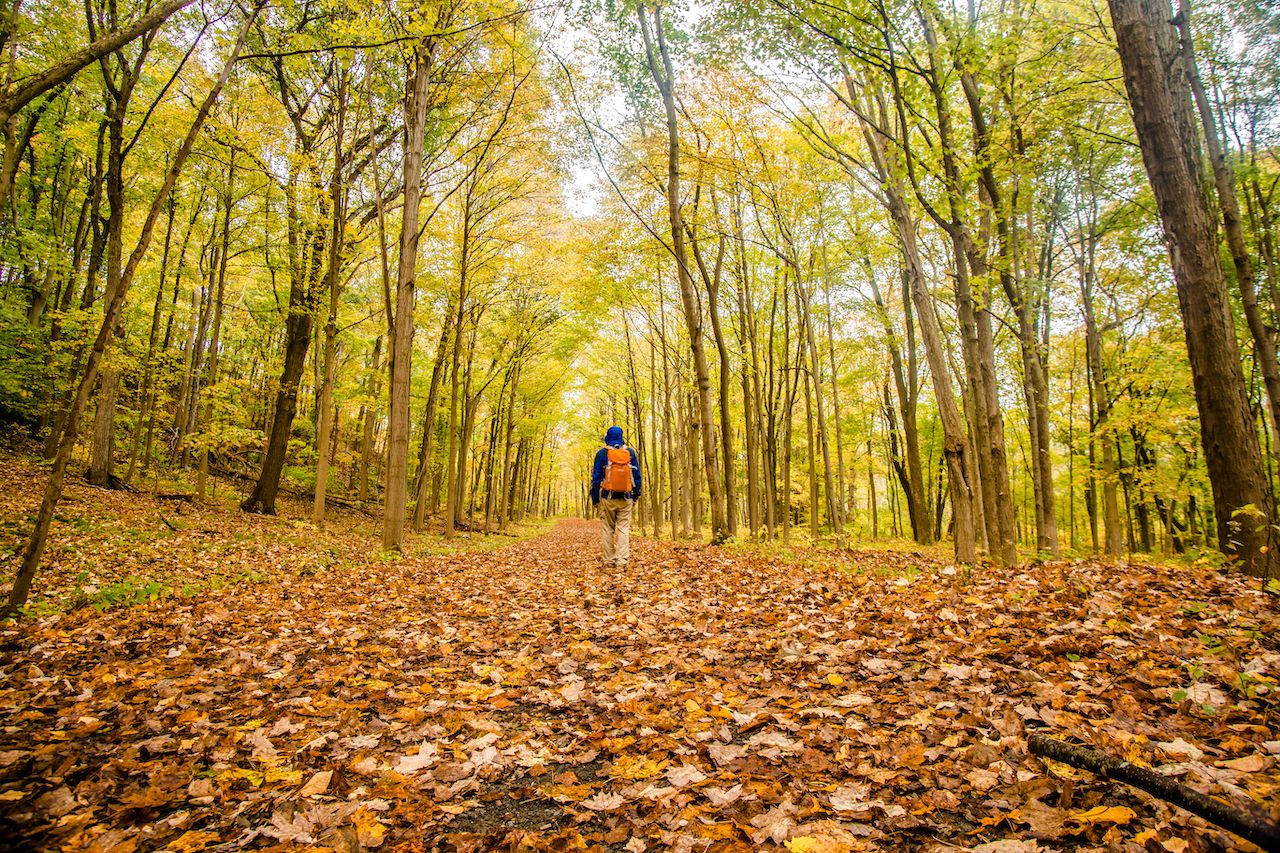 A state park for nearly a century, Sleeping Giant is named for the two-mile stretch of mountain peaks that look, from a distance, to be a giant in slumber. Of its dozens of hiking routes, perhaps the most popular is to the top of Mount Carmel, from the top of which you can look out to New Haven and the handsome buildings of Yale University and, beyond that, the Long Island Sound. Beyond hiking, fishing for trout, and picnicking with a view are favored activities of the few Connecticut residents who know about this lovely little state park. 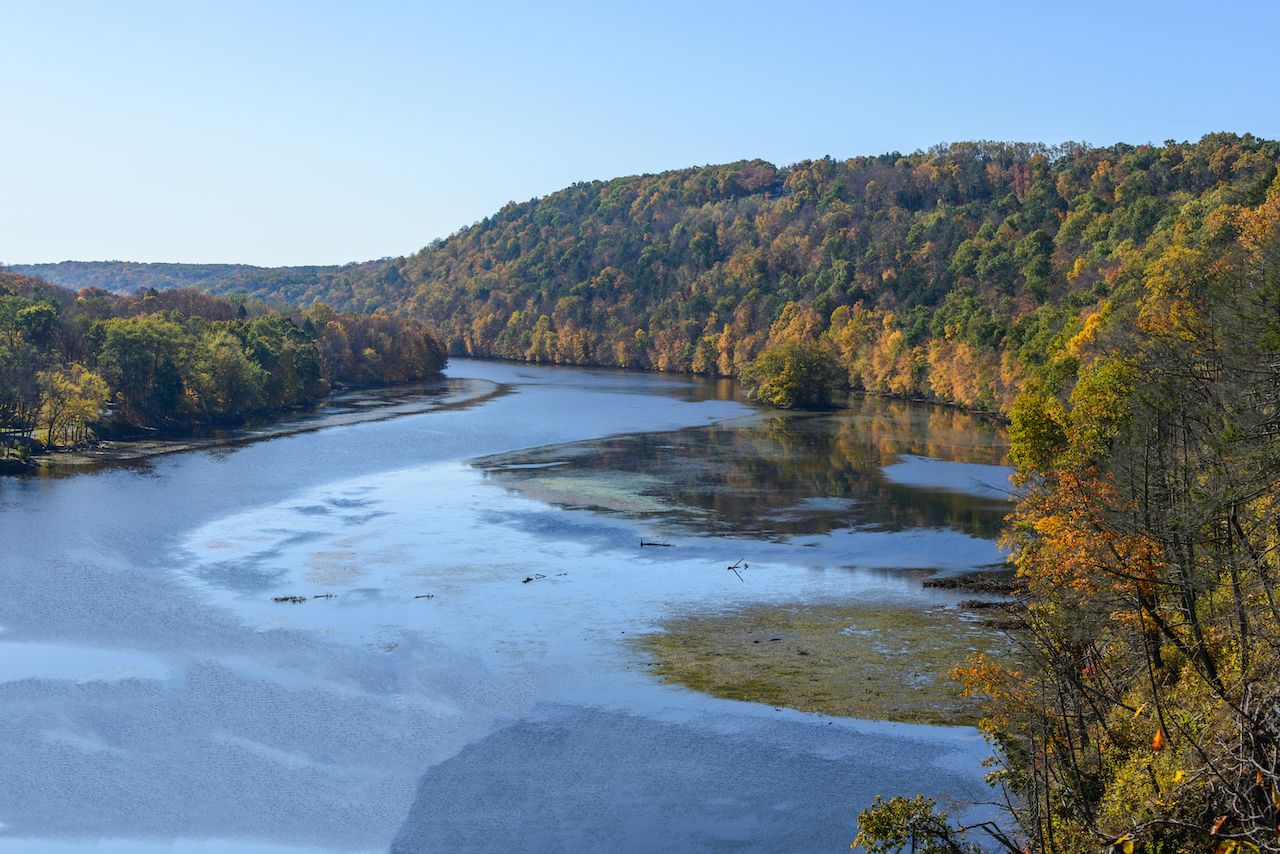 Lover’s Leap is a sweet little park with lovely views of the Housatonic River. Legend has it that a Native American princess in love with a white man paddled in her boat towards a waterfall here rather than be forced to marry a man in her tribe. When the white lover saw her boat, he jumped in to reach her and both died. The story is in fact not true, but the name remains. To confuse things more, the park’s scenic span is called the Lover’s Leap Bridge — although no lovers are known to have leaped off of that either. The bridge though, built in 1895 by the Berlin Iron Bridge Company, is worth checking out, as is the view of the river from the lookout point. 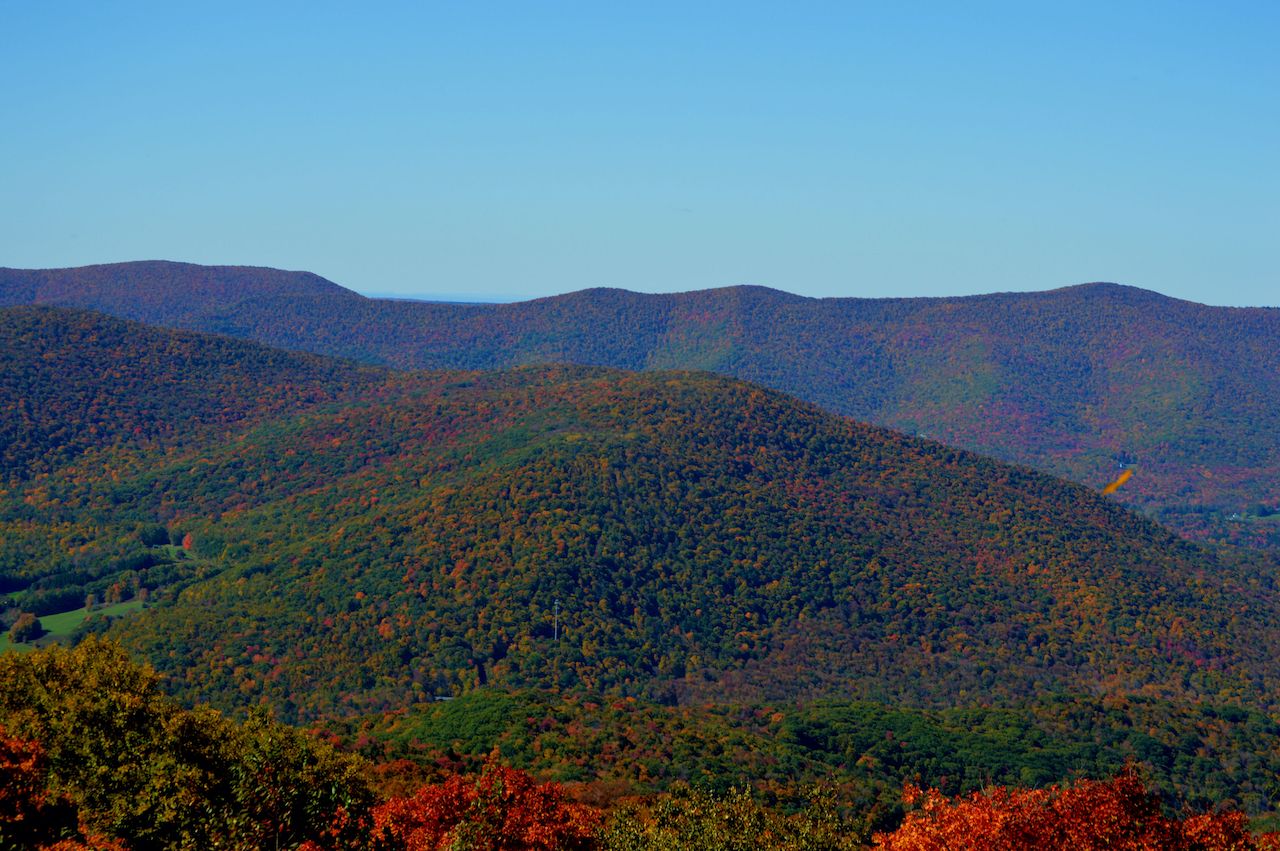 Massachusetts’s first state park, in the far northwest corner of the state, offers hiking on more than 50 miles of trails. Some of these trails, among a northern stretch of the Appalachian Trail, lead up to the state’s highest peak, Mount Greylock. At 3,491 feet, it’s not exceptionally high, but high enough to afford wrap-around views of five states. Mount Greylock is most photogenic in the fall, when its leaves of yellow birch, beech, sugar maple, and hemlock take on the golden, crimson, and ochre hues of autumn. In the winter, it welcomes cross-country skiers and snowmobilers, who follow trails all the way to the peak. 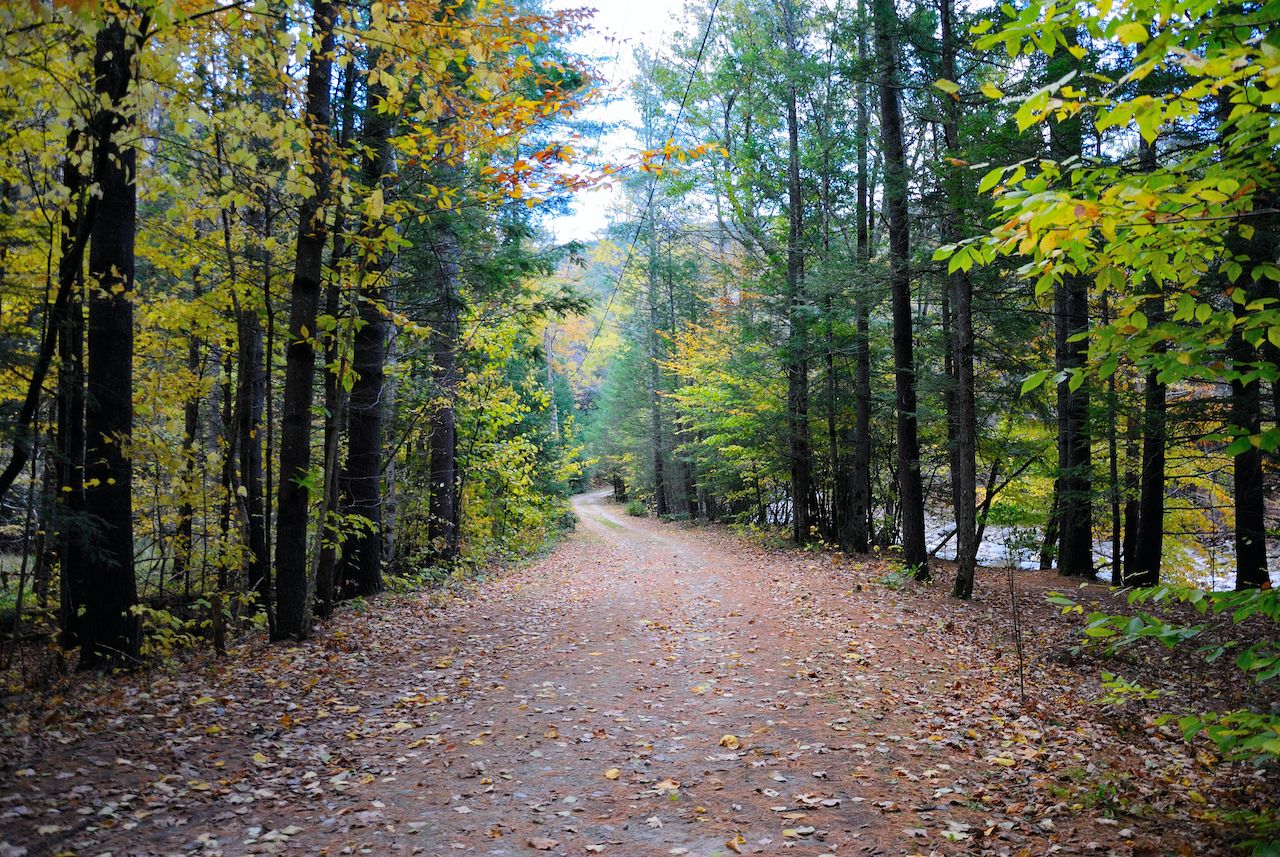 Named for a trading route between Native American tribes in the Atlantic with those located much further inland, this 6,000-acre park in the Berkshires of Western Massachusetts shows off some of the most beautiful nature in Massachusetts. It’s packed with trails through the maple, oak, hemlock, and pine woodlands that take you up to stunning viewpoints overlooking mountain ridges. 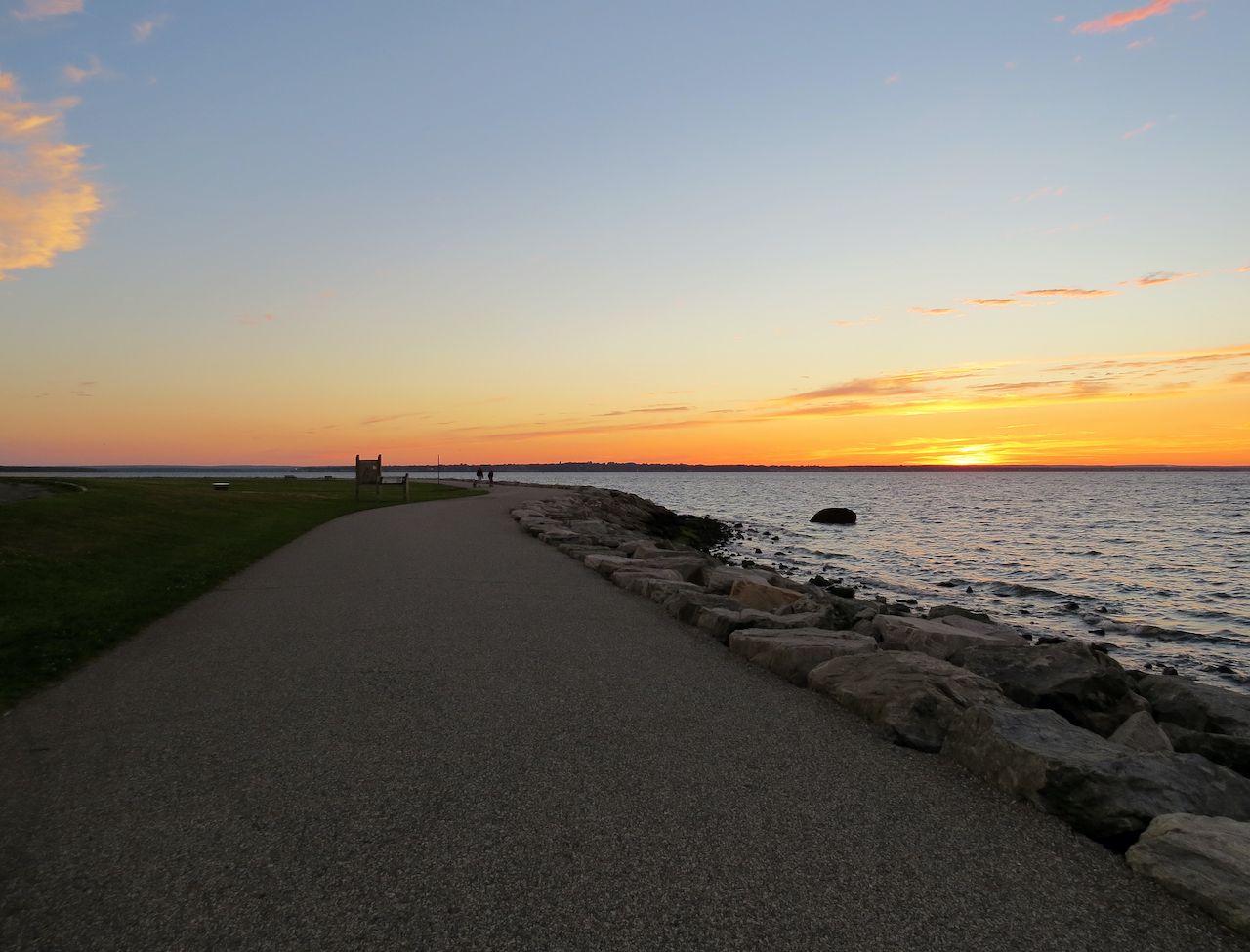 The loveliest state park not far from Providence allows you to walk along the water on paths flanked by trees and lovely low walls made of rocks. This park is not necessarily uncrowded. In fact, its Stone Bridge by the Mill Gut is a favored spot for wedding photos. It’s also less rustic than the other parks on this list as it features lovely fruit trees and flower gardens, as well as carefully tended lawns. But if it’s a bit of nature’s healing power that you want, you’ll certainly find it walking or biking along the Narragansett Bay or having an outdoor meal at one of the many groves with picnic tables.