Food is more than just fuel for the body. A creamy serving of mac and cheese has the power to bring back memories from childhood. Pizza often serves as nourishment for the soul and a loyal travel companion, and stirring a pot of chili verde can evoke happiness and the feeling of home. Finding comfort in food is something that our remote team at Matador Network knows how to do well, from Finland to New York City to Bulgaria. These are the comfort foods from around the world that we turn to. 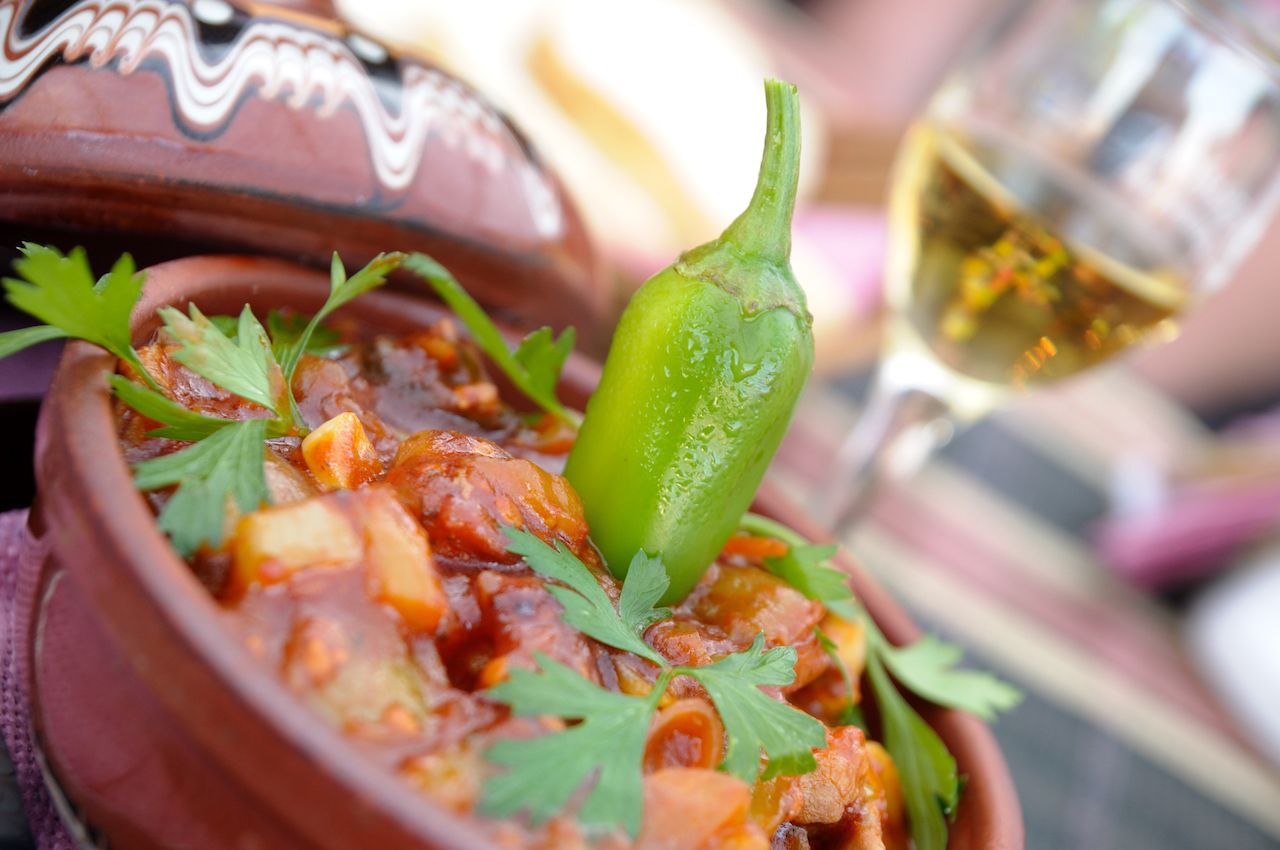 “I was raised in Bulgaria, and one of my family’s cardinal values (and most of the country’s, for that matter) was to always eat natural, homemade food. Every year at our local Easter fair, my mom would buy a new clay pot, which the dish gets its name from, and prepare gyuvetch. The dish is a potluck of meat (pork or chicken), onions, potatoes, sausage, kashkaval, and smoked cheese. The final product is gooey, creamy, and rich — perfect for giving you that cozy feeling of home.” — Dayana Aleksandrova, Community and App Manager 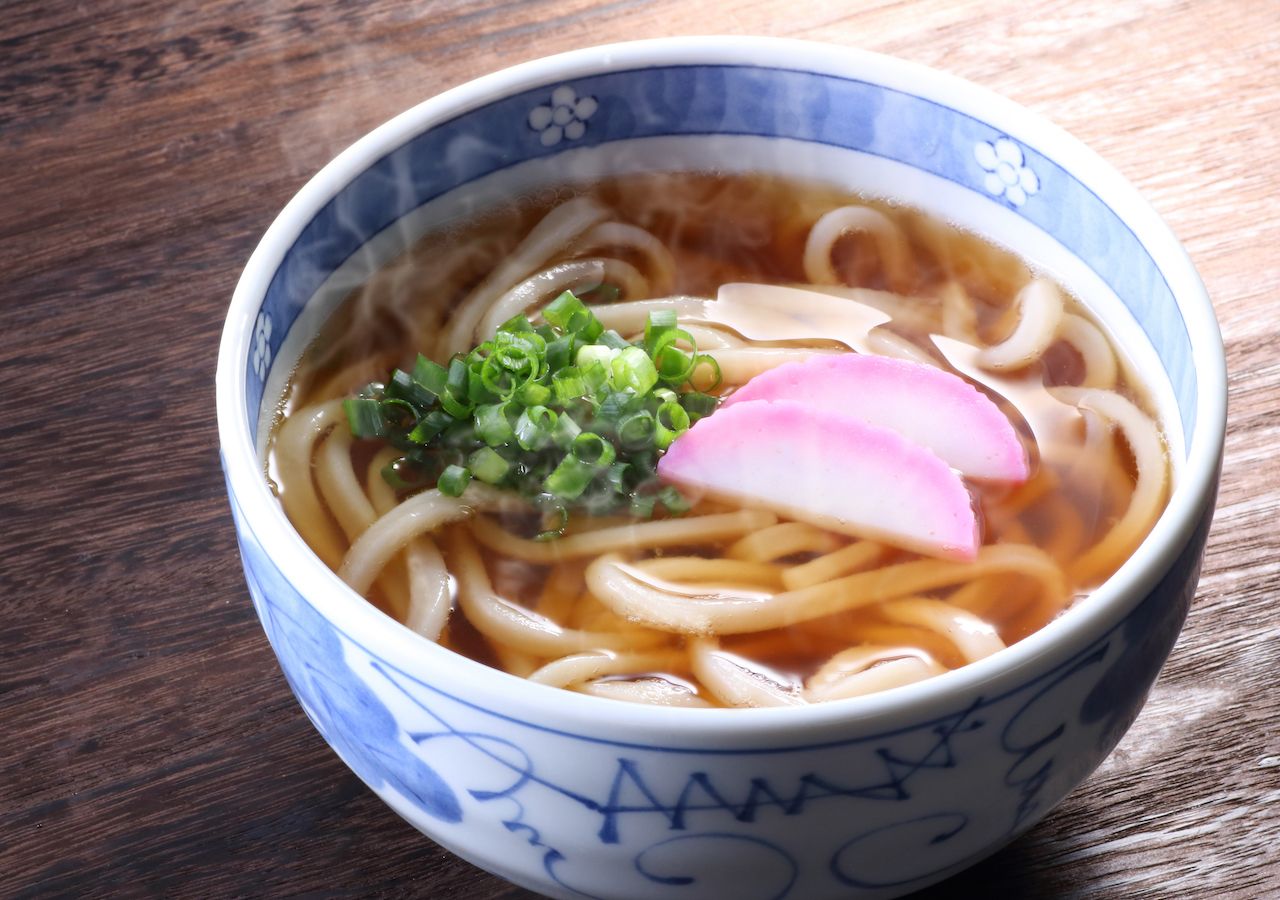 “My favorite comfort food is my homemade miso udon. It’s from Japan where I was born. The main ingredients include miso paste, kombu, dashi, udon noodles, tofu, carrot, scallion, and mushroom. It’s a go-to for us when someone is feeling under the weather, but also when we want something delicious and nourishing.” — Christine Desadeleer, Executive Assistant 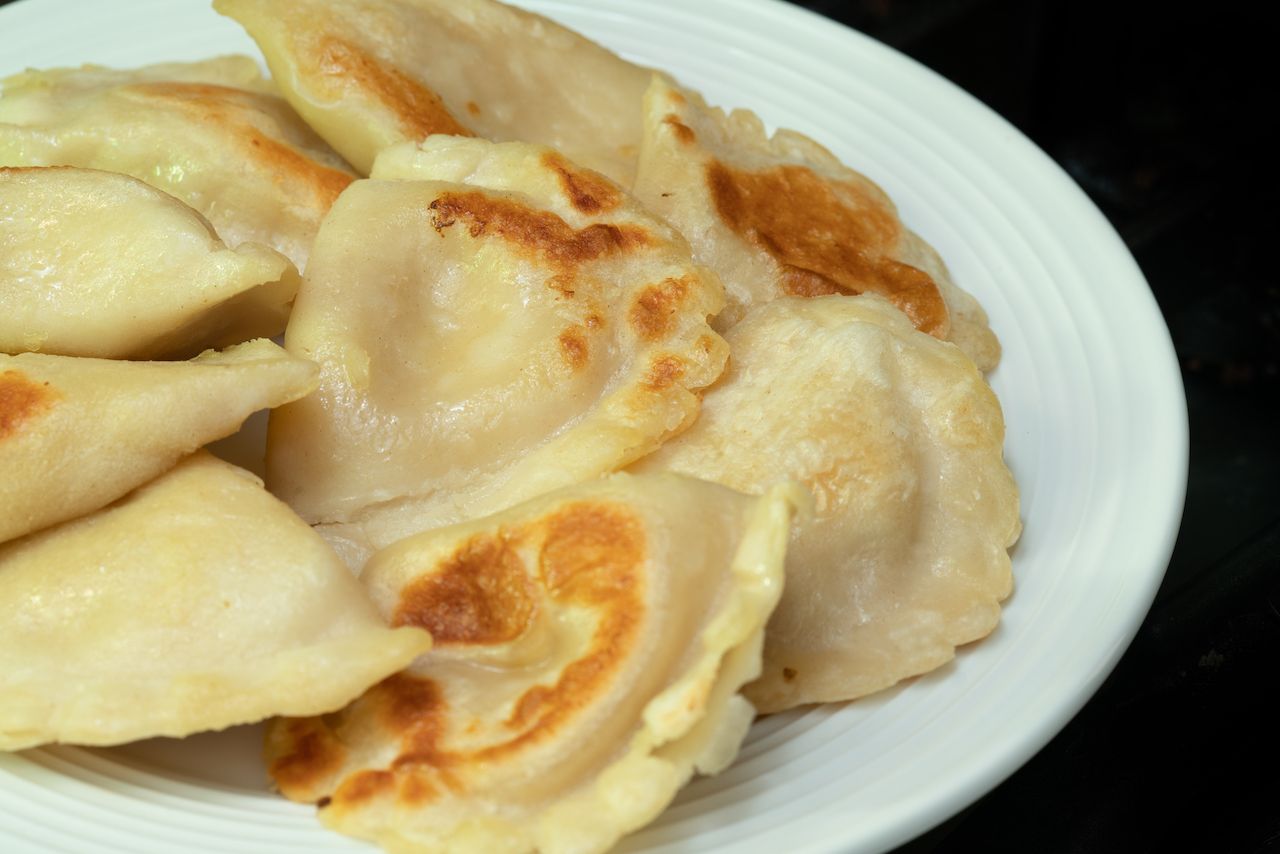 “I’m of Russian descent, so when I think of comfort food, pierogies are the first thing that comes to mind. A boiled flour dumpling stuffed with mashed potatoes, cottage cheese, sauerkraut, meat, spinach, and butter is the most satisfying treat! You can top it with melted butter, sour cream, and fried onions for extra flavor.” — Rob Chursinoff, Video Editor 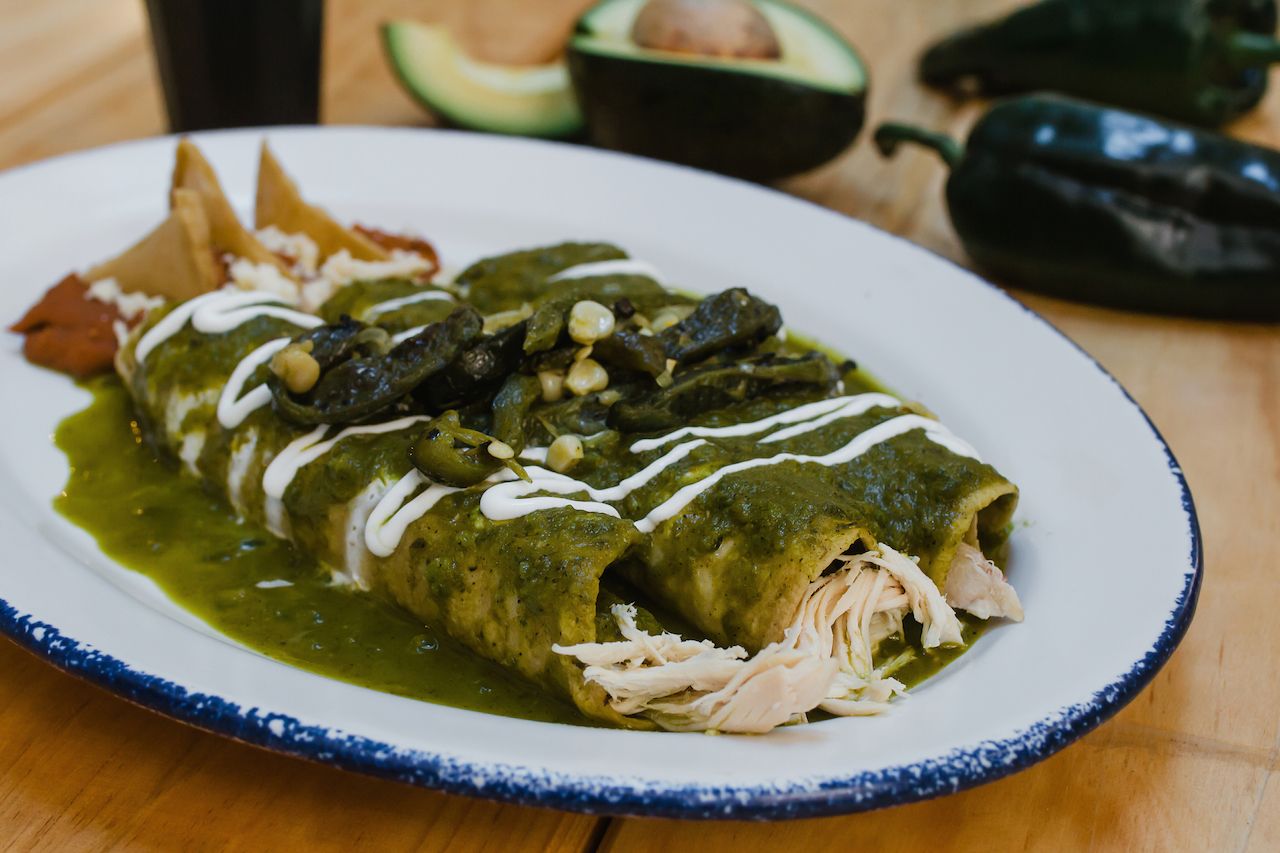 “My favorite comfort meal is enchiladas verdes. I grew up with dishes like this in San Antonio, and apart from being objectively the most delicious thing on the planet, they always taste like home to me. The main ingredients are tortillas, chicken, garlic, peppers, cilantro, and cheese, but it’s really the tomatillos that tie it all together.” — Hal Amen, Director of Ad Ops and Senior Editor 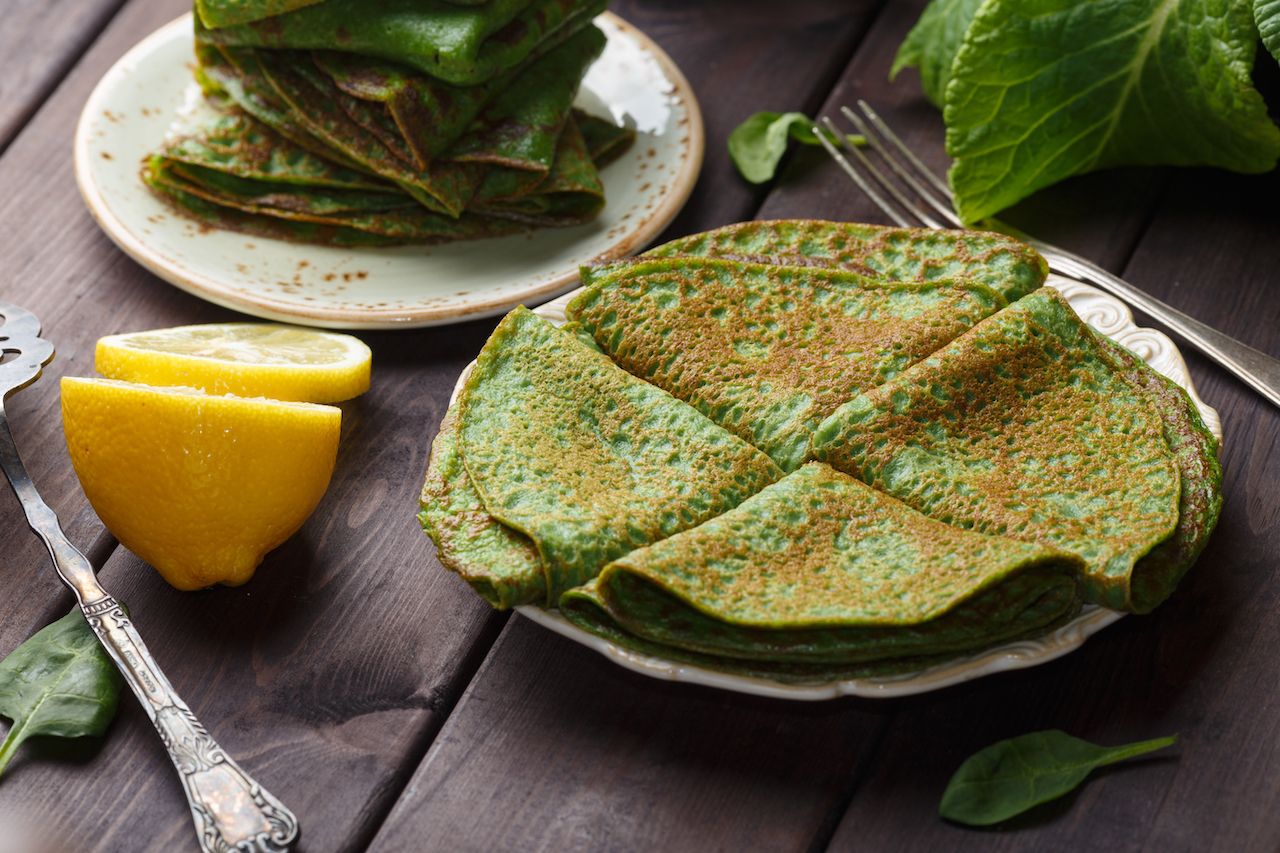 “Our family’s favorite comfort dish is pinaattiletut, which means “spinach pancakes” in Finnish. But really it’s like a savory crepe, with the spinach mixed right into the batter. I learned this recipe from my Finnish mother-in-law, and it still reminds us of her. It’s super easy to make with common ingredients such as flour, eggs, frozen chopped spinach, and salt. You can eat it hot with melted butter!” — Noelle Salmi, Outdoor and Family Editor 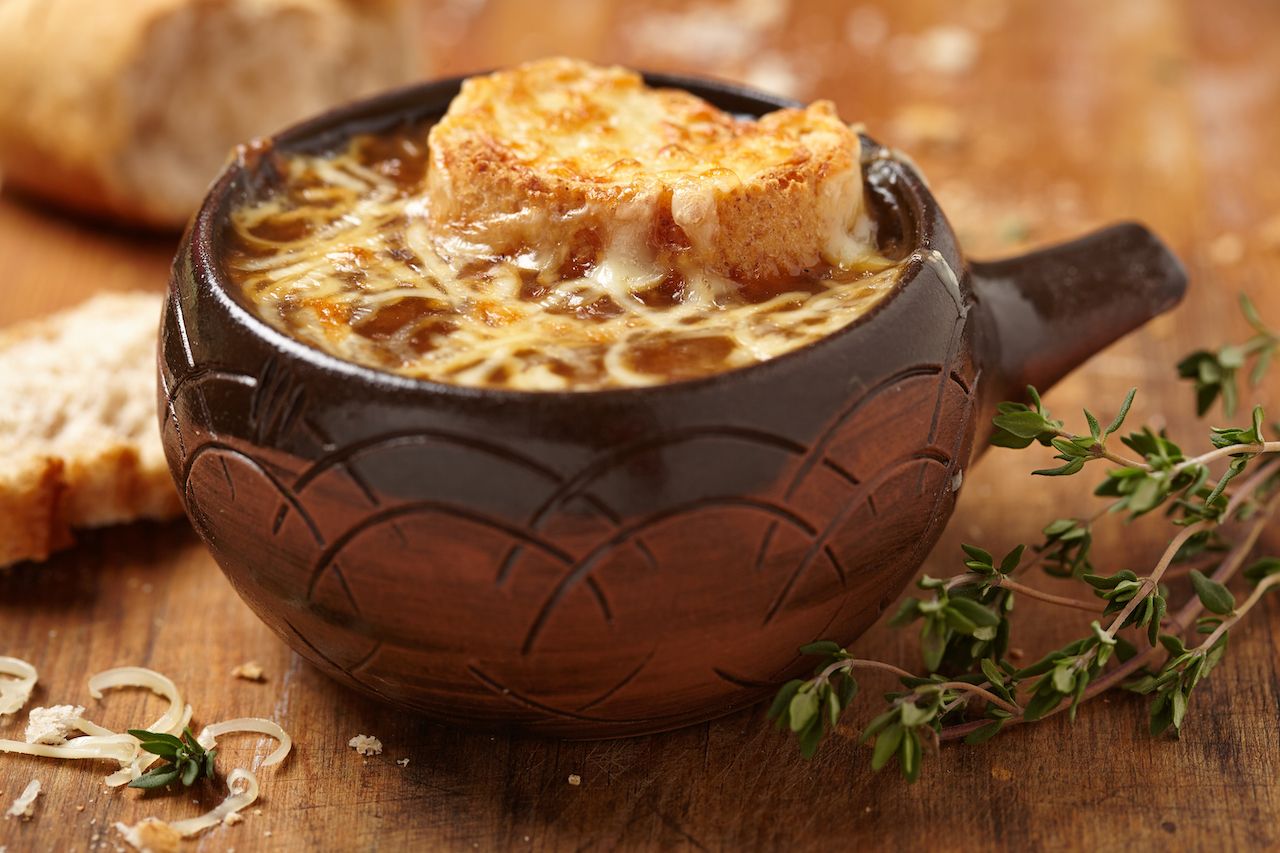 “One of the most iconic dishes in French cuisine, the onion soup is the ultimate comfort food. It’s hearty, delicious, and the melted gruyère (or Daiya vegan cheese if that’s what you prefer) does wonders for the soul. Once laddled into a bow, you can either deposit a slice of bread on top of the soup, generously sprinkle it with cheese and broil the concoction for a crispy finish, or have a thick slice of bread on the side.” — Morgane Croissant, Culture Editor and Executive Producer 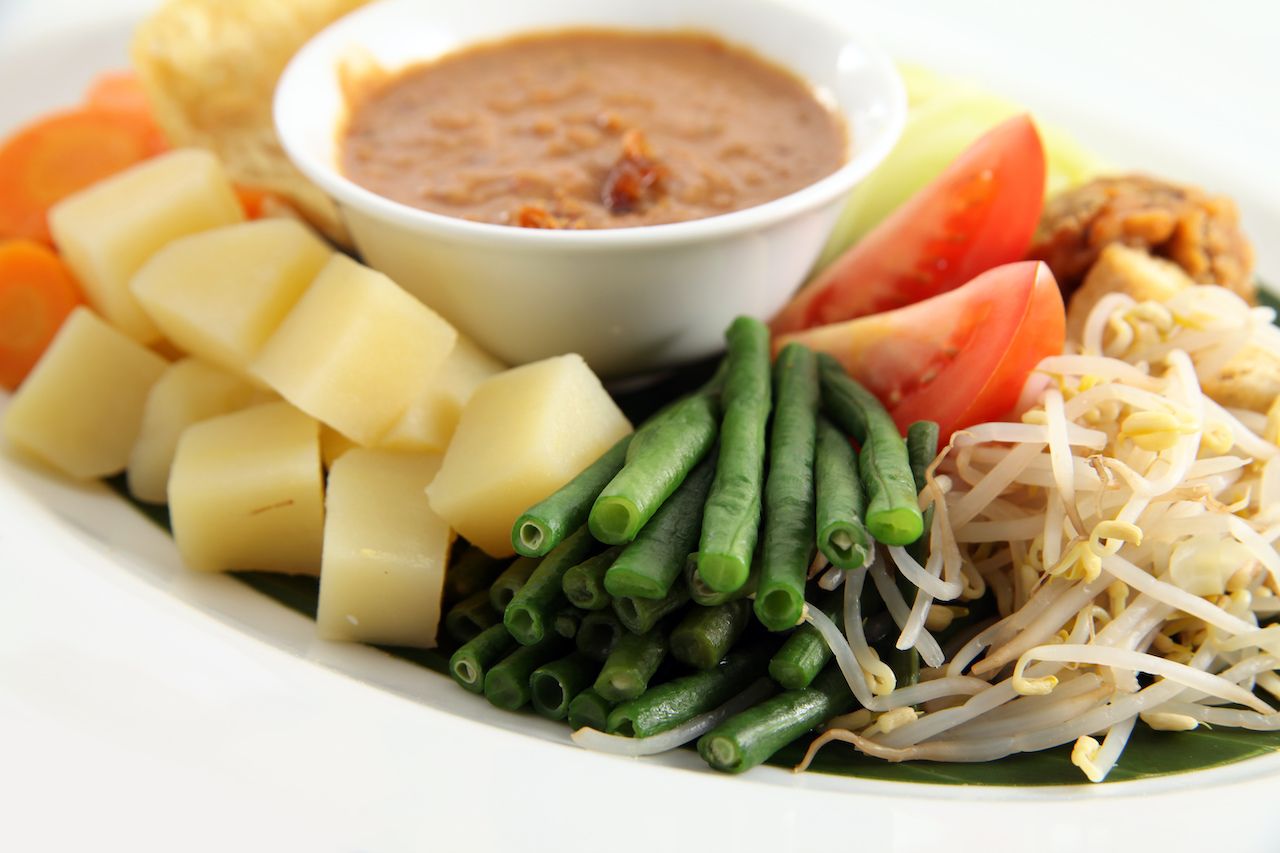 “My father spent many afternoons during my childhood bent over the stove preparing gado gado — Indonesian vegetable salad and peanut sauce. He’d slice up raw tofu and cucumber and drizzle the spicy, creamy peanut sauce on top. I’ve since re-created gado gado many times in my own kitchen, whipping together peanut butter with garlic, red chili peppers, and coconut milk in my blender. As far as snacks go, it’s a relatively healthy option, but sweet and savory are perfectly balanced in the rich peanut sauce. Make a jar and keep it in your fridge as a dip for vegetables.” — Elisabeth Sherman, Assistant Food and Drink Editor 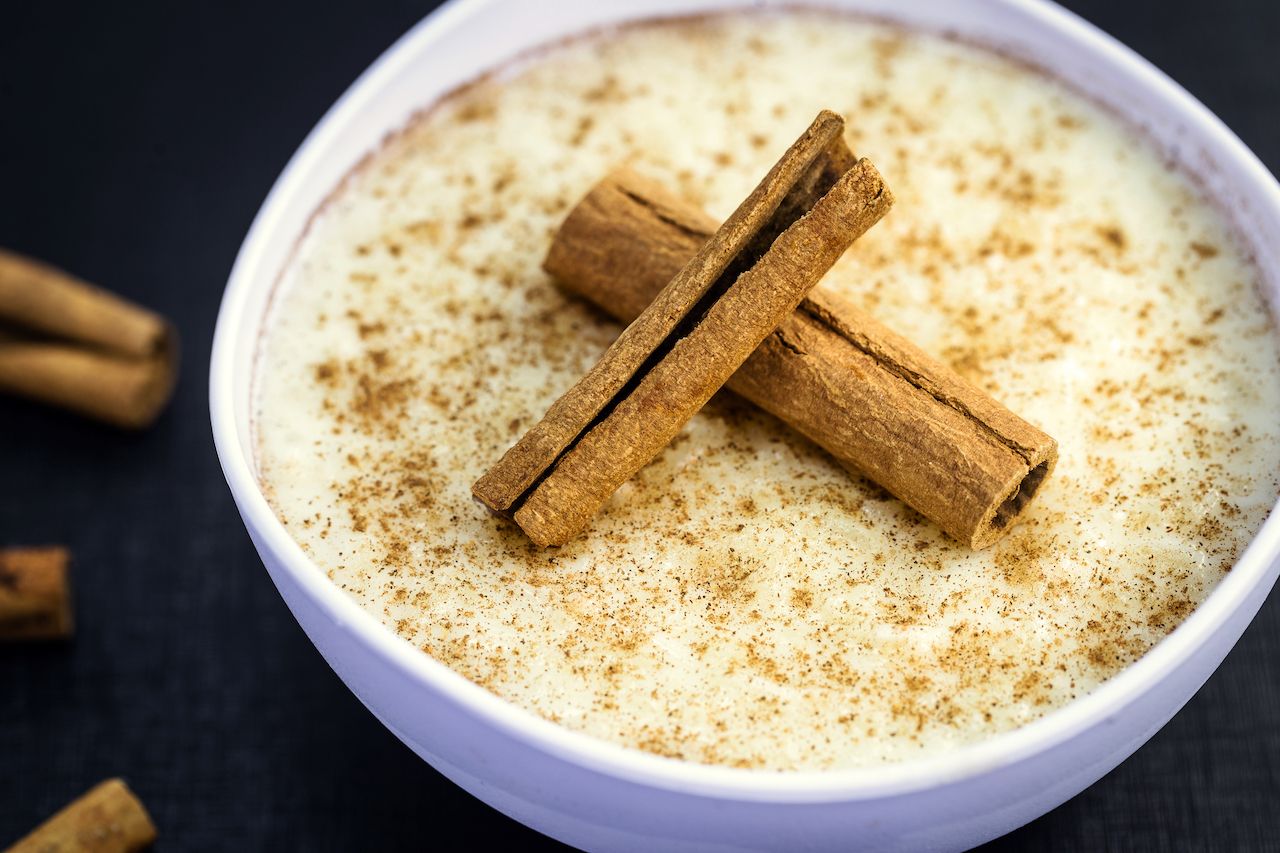 “This dessert-like, comforting breakfast was a childhood favorite for me. I used to beg my mom to make it every weekend. You boil oatmeal normally, but then you add vanilla extract, evaporated milk, and brown sugar. Add cinnamon and make it as thick as you’d like. Then eat it with fruit and enjoy the way it makes your kitchen smell.” — Exenia Rocco, Social Media Producer 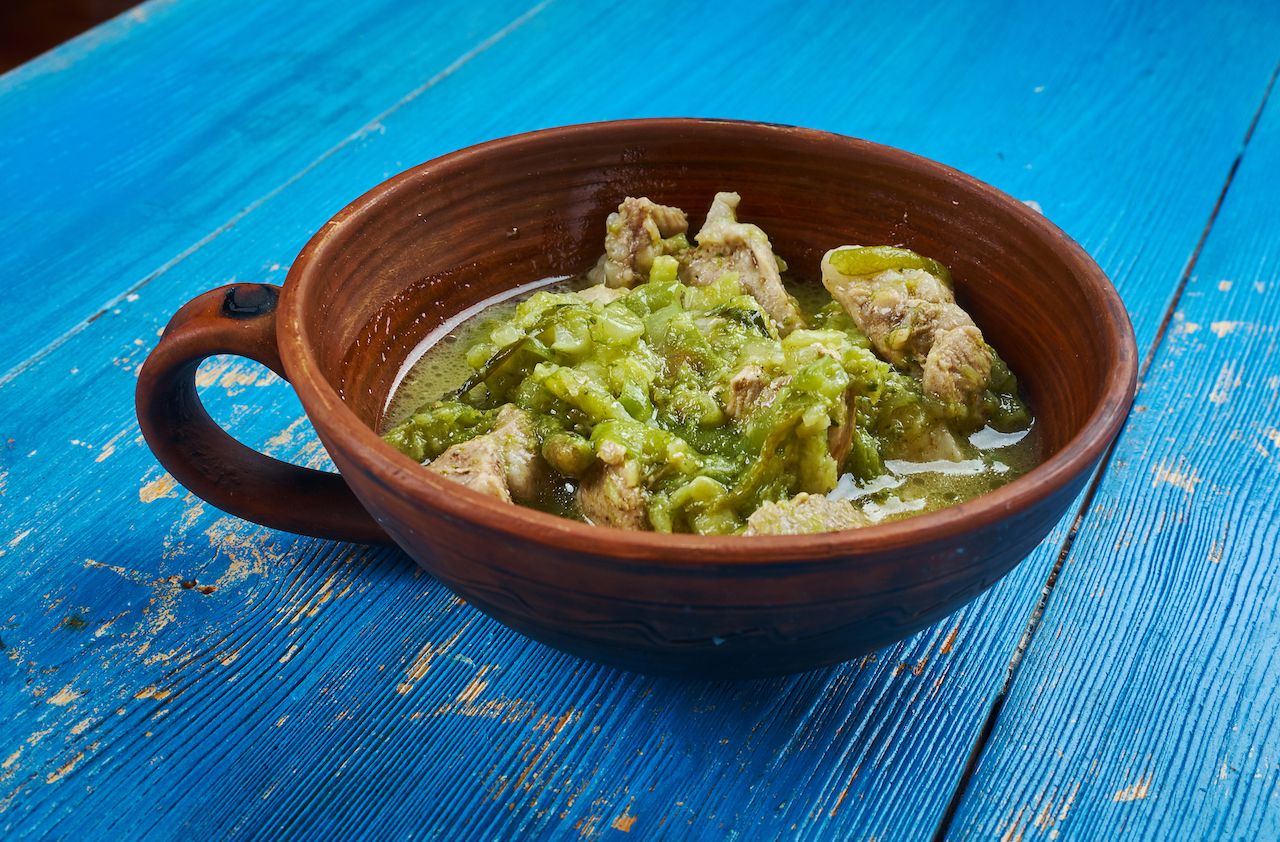 “I love chili verde because it’s simple to make with basic pantry ingredients as long as you have access to roasted green chilies. In late summer you can find them being roasted over a fire in giant drums at farmer’s markets across the Southwest. I always buy a lot and freeze them for use all year long. It’s a spicy and intensely satisfying stew with a rich smoky flavor from the green chilies and can be made with pork or vegan. It’s also super versatile — eat it on its own, with a side of fresh flour tortillas for dipping, or smother it on a burrito or scrambled eggs.” — Brian Lewis, Senior Filmmaker 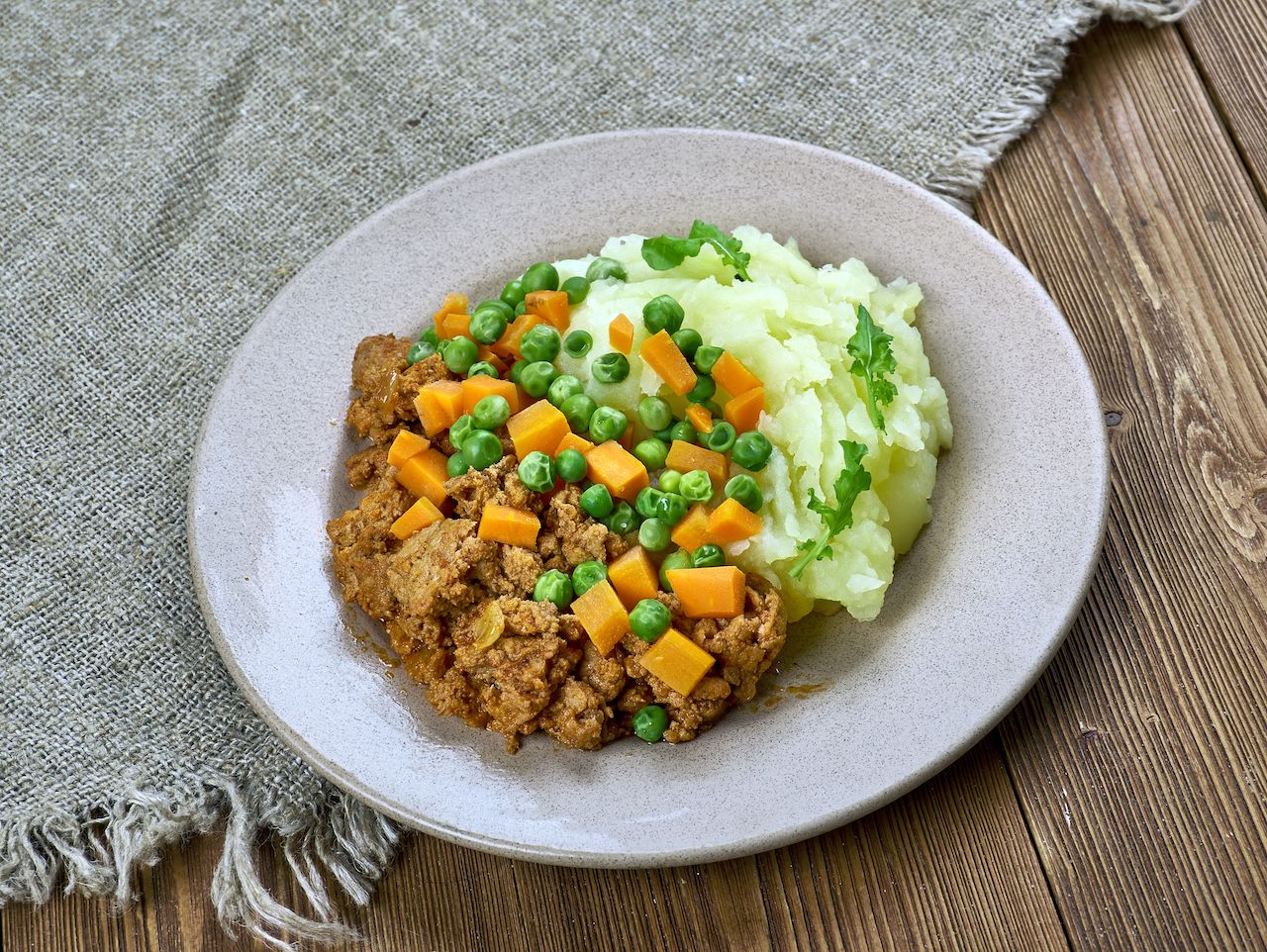 “Mince and tatties is a Scottish comfort food staple. It may sound dull, as the dish is pretty basic in that it’s minced meat in gravy and mashed potatoes, but nothing beats it. Many Scots probably relate this dish with dreadful memories of bland school dinners, but for me, it is home on a plate. Similar to a ragu or bolognese, you can also get creative with your recipe. But for me, I like to keep it simple and traditional — why fix something that does not need to be fixed? Nothing beats it when you are in need of a little TLC.” — Katie Scott Aiton, Lifestyle Editor 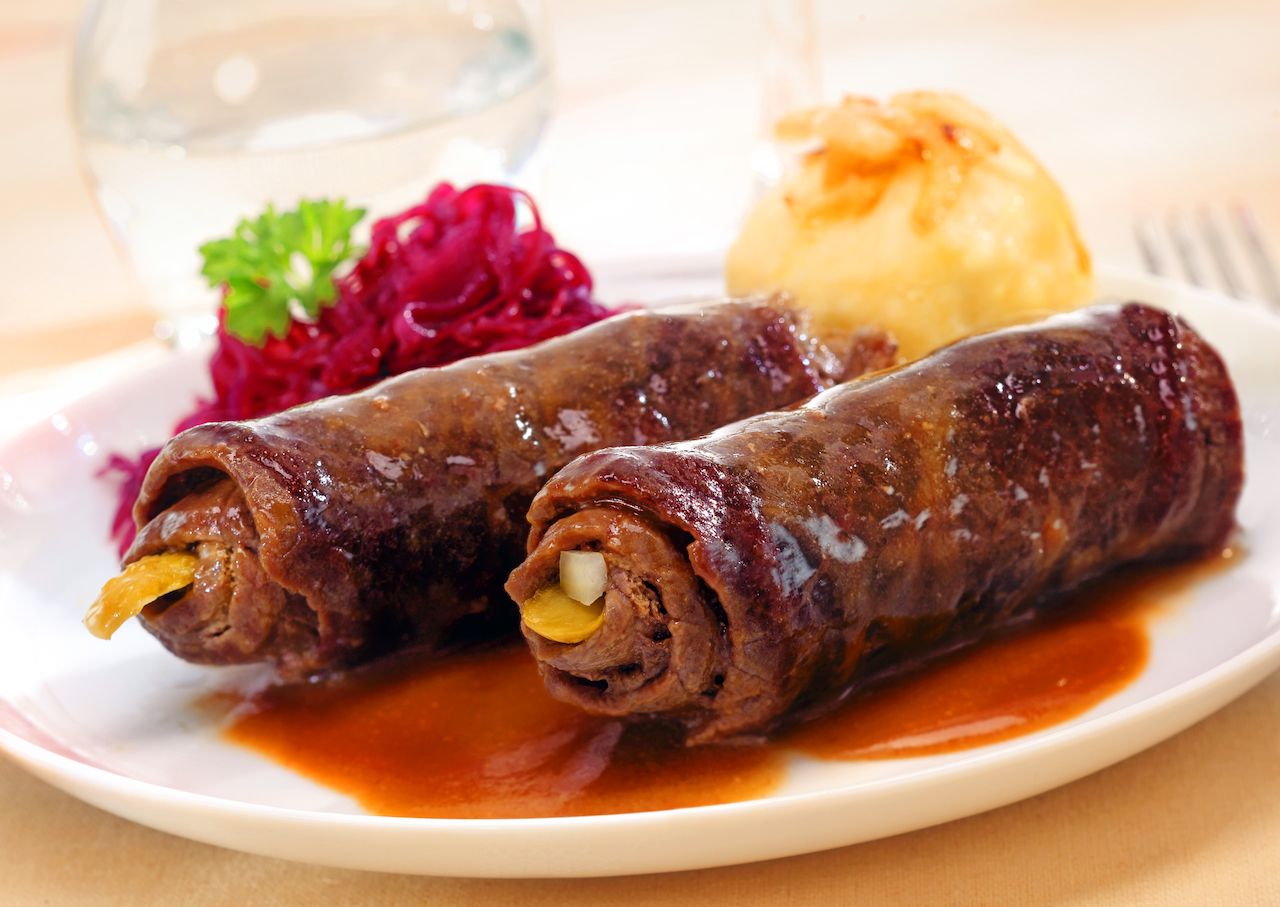 “My favourite German comfort food is rouladen. You start with thinly sliced beef, add mustard, bacon, pickle, and onion then roll it up. Sear the beef then braise it in the oven in a tomato-based red wine sauce. Serve with mashed potatoes or spaetzle, and let your plate ‘swim’ in the gravy for the ultimate comfort.” – Stefan Klopp, Director of Development and IT 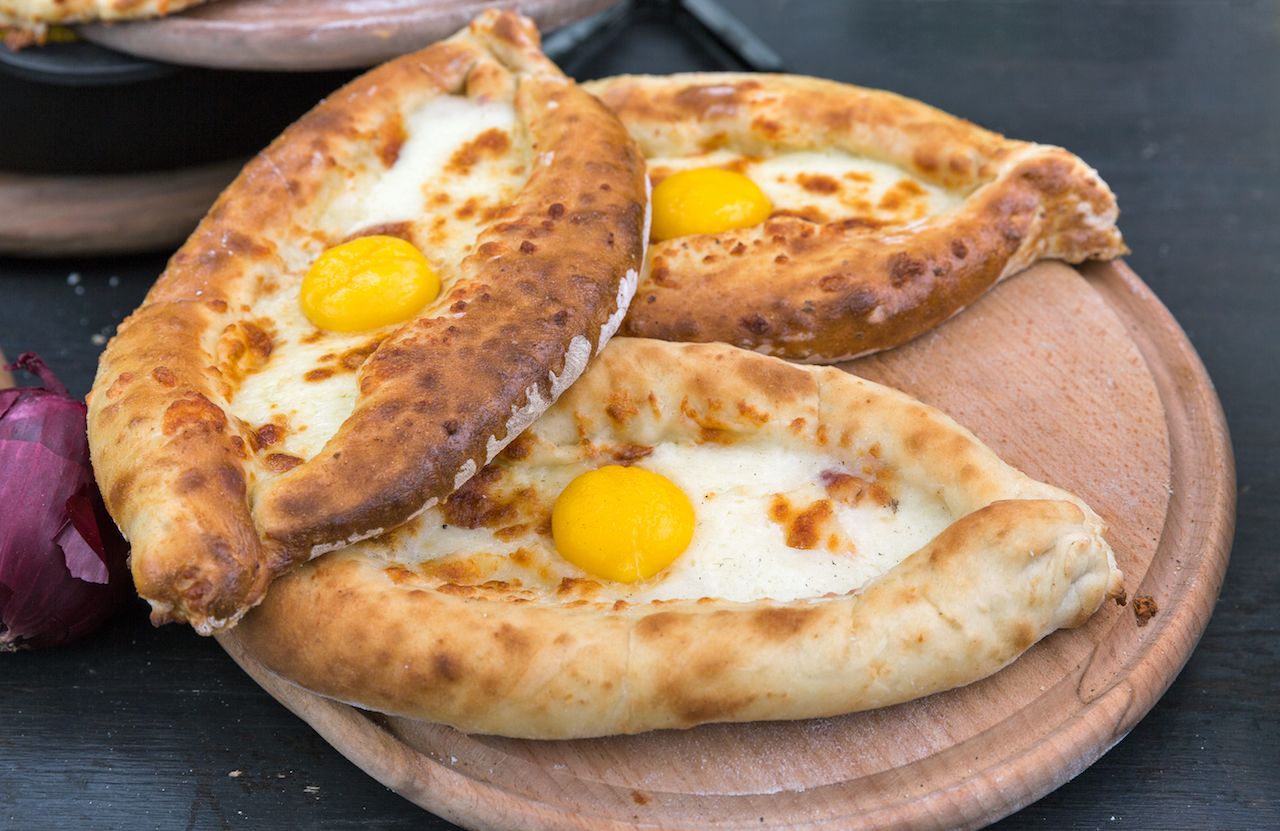 “Khachapuri was love at first taste for me. Chewy and gooey, soft and salty: This classic Georgian cheese and egg bread reminds me of the best possible version of an impromptu cheese dish my mom used to throw together when we were kids. I tried making it at home for the first time while self-isolating, and I’m still not sure what was more comforting: kneading away stress while working the dough, waiting patiently for the bread boat to get golden, or tearing off that first corner to dip into the cheese pool in the center. I’ve never actually been to the Caucasus region, but I already know the first thing I’m doing if and when I touch down in Georgia.” — Alex Bresler, Copy Editor and Digital Producer 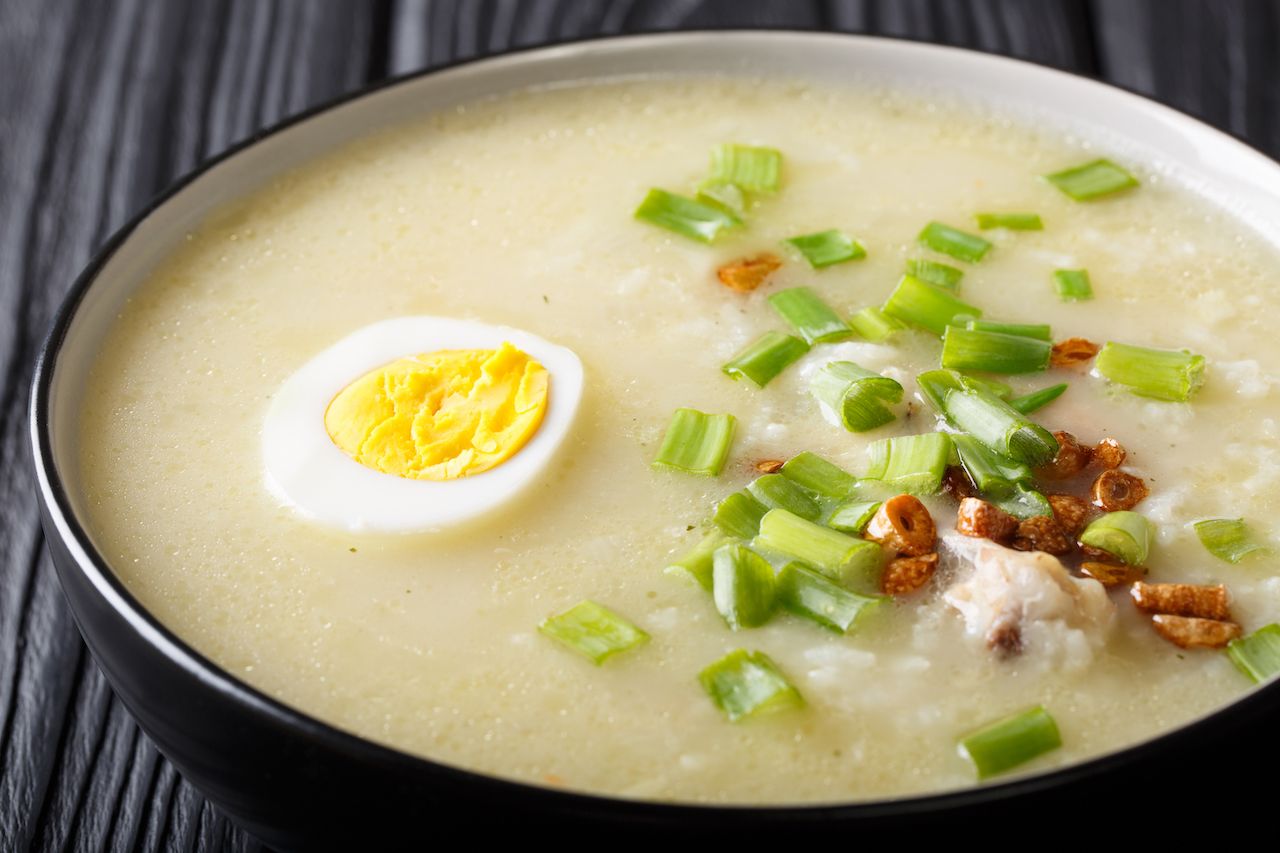 “When I was young my dad used to make chicken arroz caldo when I had a cold or flu. I think he supercharged the ginger because that’s what I remember the most about it, and it’s great when you’re sick. He didn’t make it with hardboiled eggs like many recipes do, but I kind of wished he did!” — Carlo Alcos, Senior Video Editor 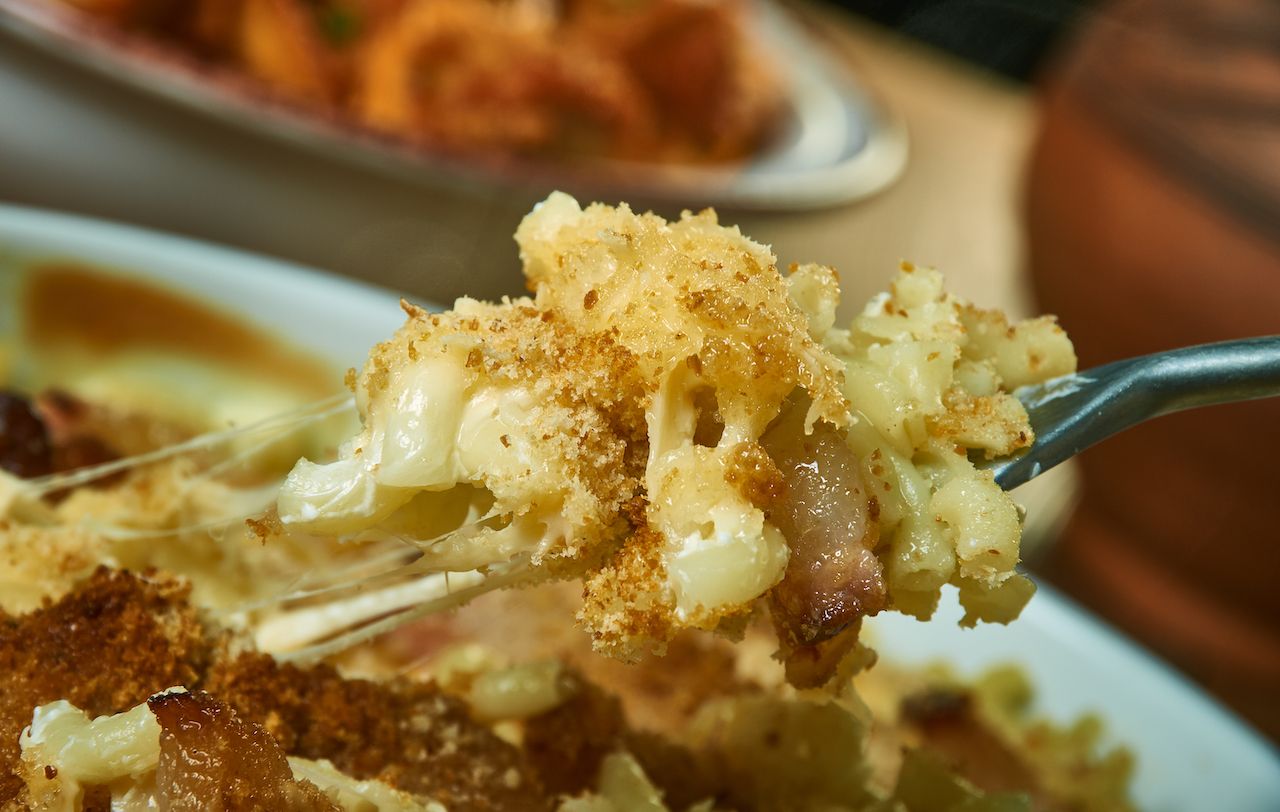 “Growing up, my favorite comfort food was my mom’s mac and cheese. It has everything you could ask for: pasta, pepper, chili flakes, chives, and an extreme amount of cheese. I was (and still am) a fan of putting every type of the sharpest cheddar available in the mac, though now I appreciate something stinky in there as well. Mac and cheese is about as American of a comfort food as you can get (though homemade is always — always — better than the kind that comes in a box).” — Nickolaus Hines, Food and Drink Editor 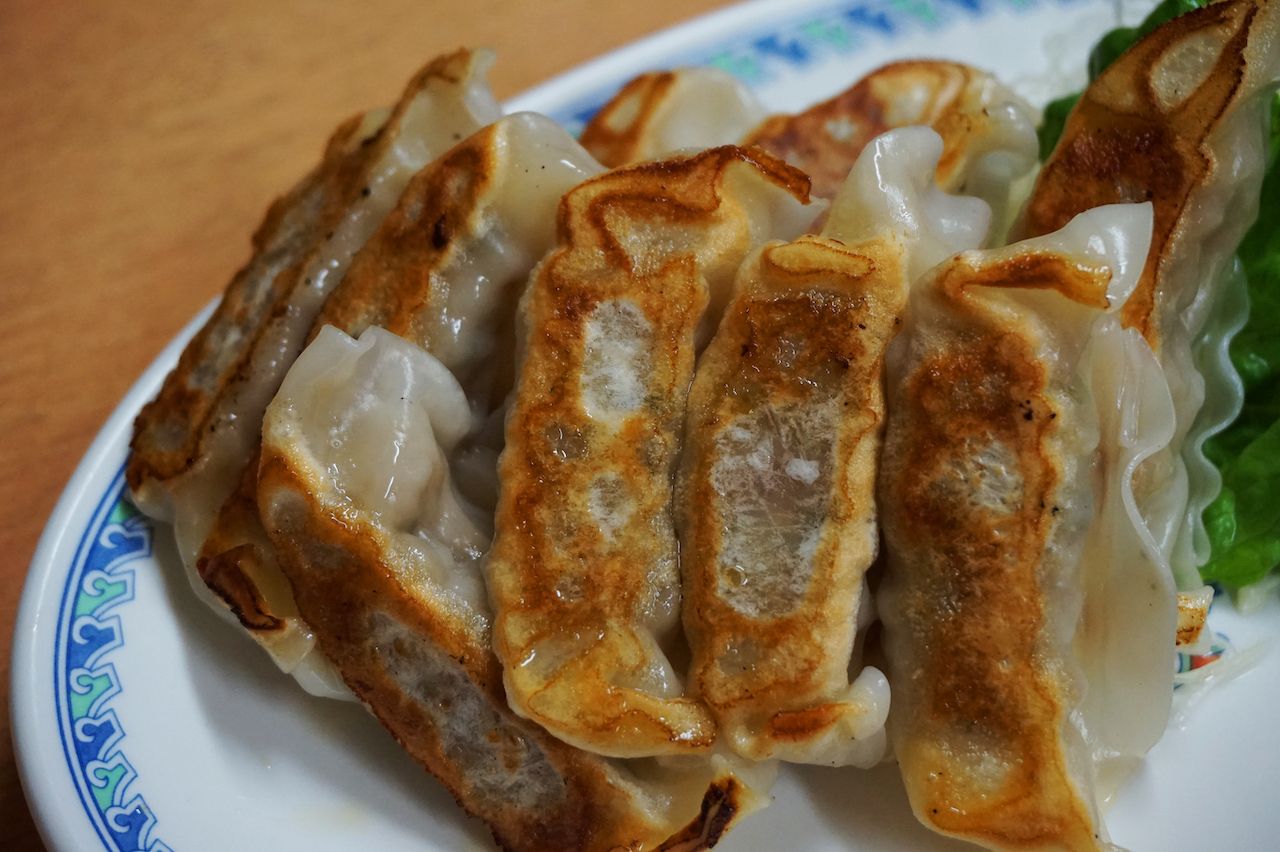 “My dad and stepmom live in Japan, and our fave comfort food over there is homemade gyozas. At-home gyoza is an activity as much as a delicious meal. To make gyoza at home, you can create any type of filling you want, stuff each wrapper and seal them individually like you would a pie, and then fry or bake the individual dumplings to serve.” — Ocea Jacobs, Trips and Experiences Manager 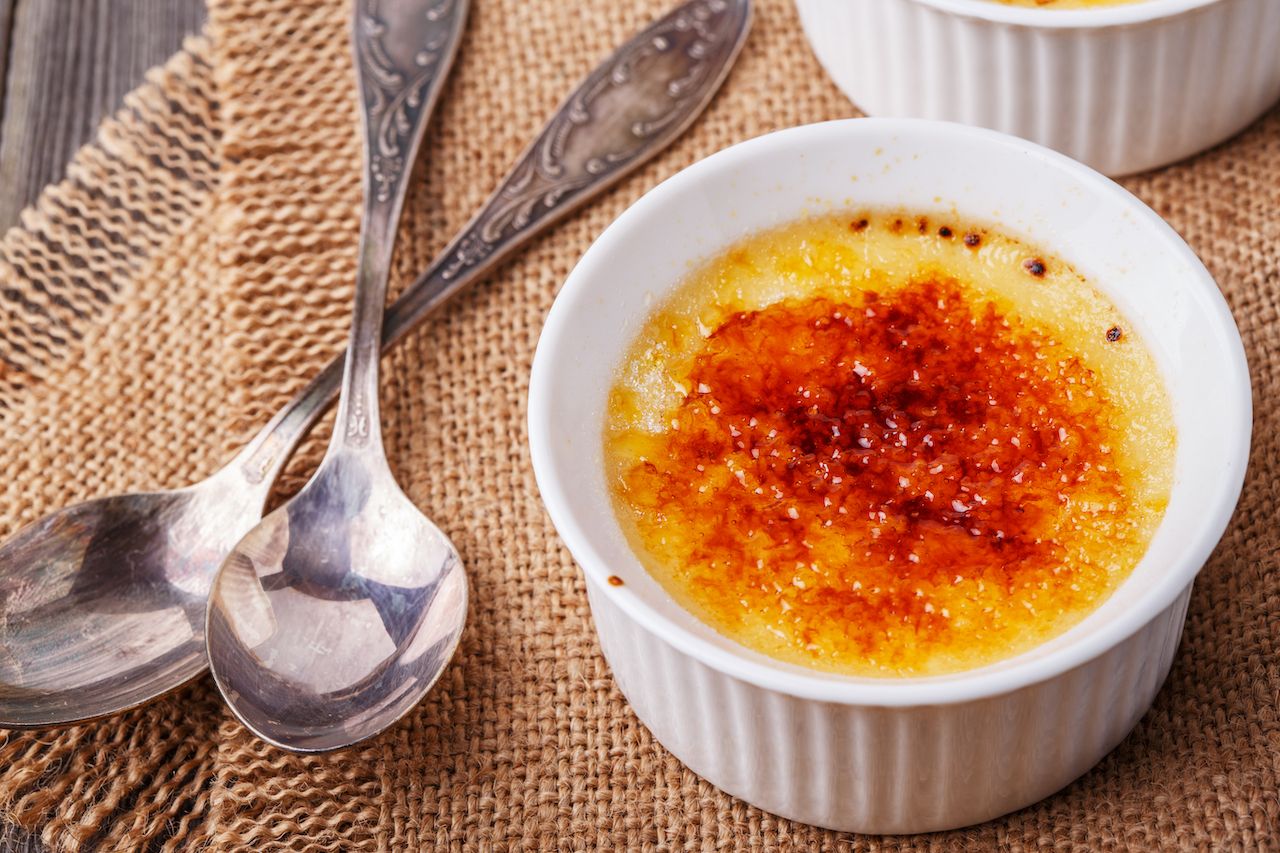 “Comfort for me is always tied to family and reassurance. For my favorite indulgence, though, it has to be crème brûlée. Growing up, my parents owned a restaurant that made the most perfectly crisp and vanilla version. That first bite where you break through the crust is the absolute best. I remember after studying abroad, the chef agreed to make some for my arrival home. Well, he only knew how to cook in batches, so I was left with 20 or so crème brûlées to work through (which I slowly did over a week and with help from others). For both, it’s the thoughtfulness of the preparedness that brings that warm feeling of comfort.” — Alyssa Derby, Director of Social Media 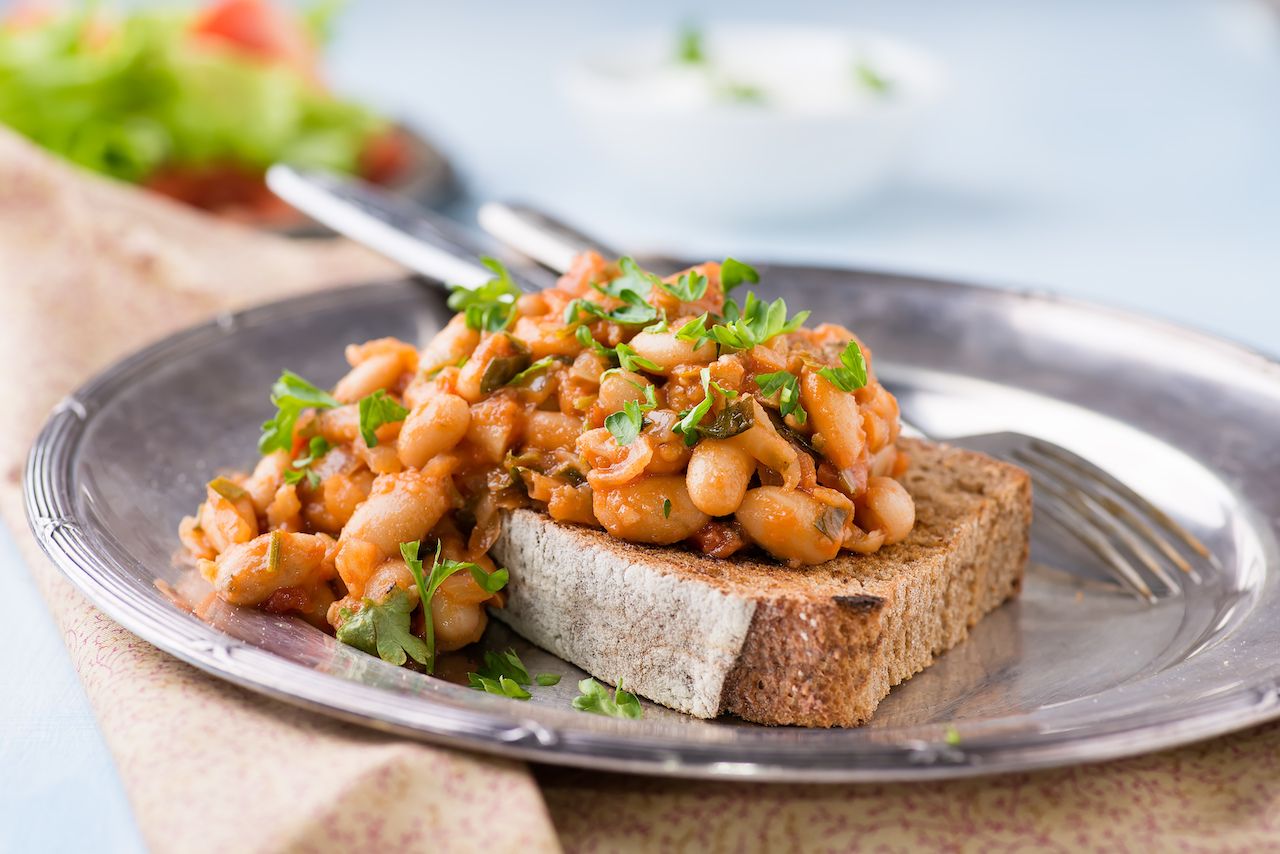 “Is there anything more comforting to a Brit than beans on toast? It’s such a warming and comforting dish — easy to make, and if you’re like me, you’ve always got a can of Heinz tomato beans in the cupboard. Meera Sodha (columnist for The Guardian) takes it to a whole other level with her vegan masala recipe, which adds a spicy kick to produce an even better version than the original.” — Alice Latham, Supervising Producer 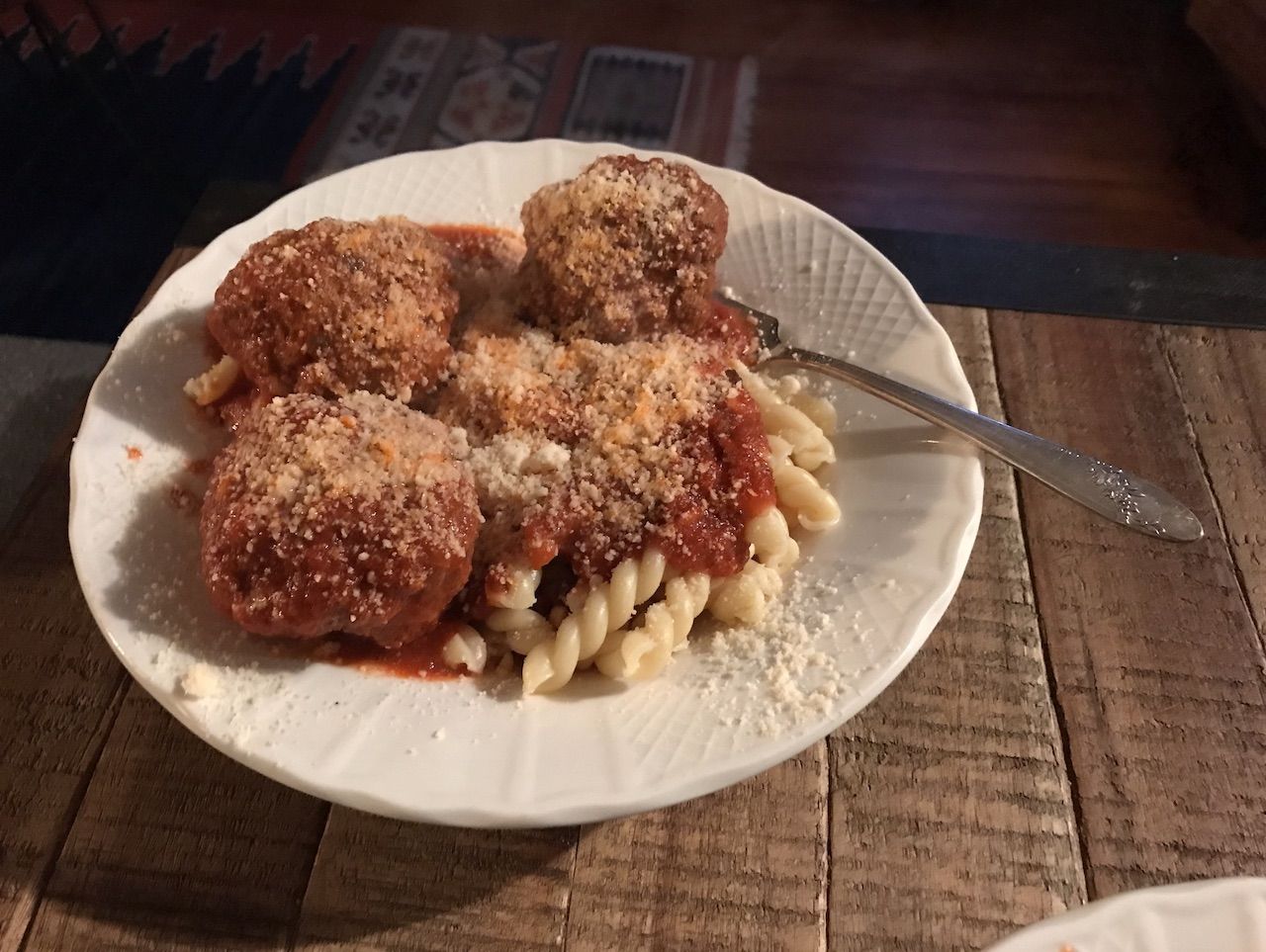 “I can’t say I’ve ever encountered a gigantic plate of spaghetti with meatballs, pork, and spicy sausage, loaded with parmesan cheese, in Italy. But it doesn’t get more New York/New Jersey Italian than a Sunday sauce (not gravy). The best part about our family’s sauce is that we use common canned tomatoes you can find at any store (though we are VERY particular about the brand), meat from any supermarket butcher, boxed Barilla pasta, and grated parm from the big ol’ green bottle. But it’s the seasonings that matter. You have to stir it every 10 minutes, all day, and the smell takes over the house. It certainly isn’t authentic to Italy, but it tastes like home, and it’s the best I’ve ever tasted in the tri-state.” — Laura Reilly, Director of Editorial 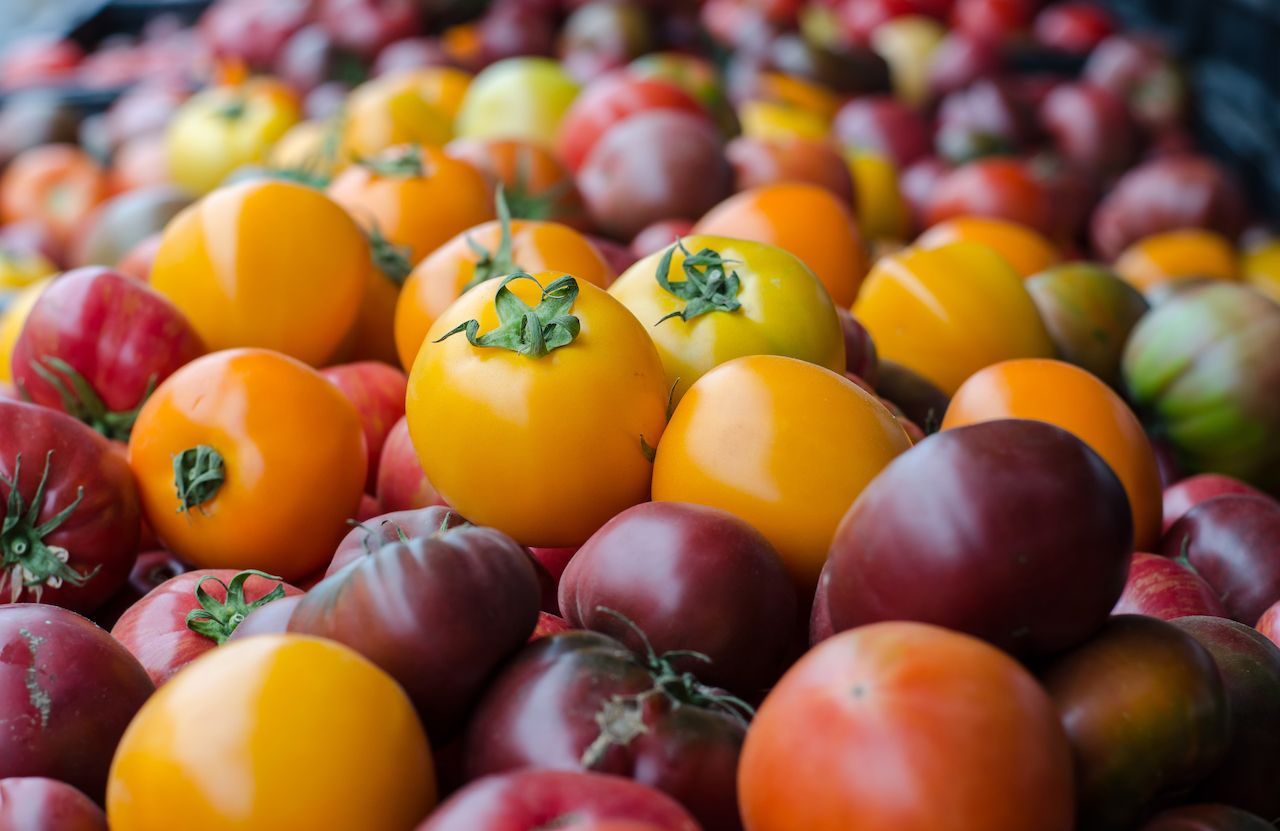 “One of the many things our family loves about living in North Carolina is access to farm-fresh fruits and vegetables. My little family buys a majority of our produce at the farmer’s market in an effort to support our local farmers. We don’t take any greater comfort than eating a plate of fruits and veggies! Our favorite is definitely tomatoes with a little sea salt and balsamic glaze.” — Brooke Ptaszek, Supervising Producer