There’s hardly a better way to get away from it all than to get out on the water. A long-distance canoe or kayak trip provides stunning, changing scenery and a sense of serenity. The only question is where to go. You could opt for a leisurely float across multiple lakes or take on a more challenging combination of calm water and rapids. You could paddle in between steep canyon walls, along forested riverbanks, or while viewing abundant wildlife on historic rivers. Here are the best options for a long-distance canoe or kayak trip.

The length of a long-distance trip depends on you and how much time you have. As you map out your trip, plan to paddle about 15 miles a day. If this is your first time headed out, be sure you do it with someone who has gone before. Depending on where you are going, you may be best off going on a guided tour. At a minimum, talk to locals who can give you specific tips.

If you are not a highly skilled kayaker, you’re going to want more calm conditions — which will influence where and when you go. Most places that are suitable for canoes will have glassy, easy water to dip your oar into. If you’re headed out to rivers fed by glacier run-oft, opt for late summer, after the peak water flow. Check American Whitewater for reports on conditions and understand how to read river conditions.

Wherever and whenever you go, make a detailed plan of the distances you’ll travel per day and where you intend to camp at night. Be sure to leave a copy of that plan with a friend or loved one back home. 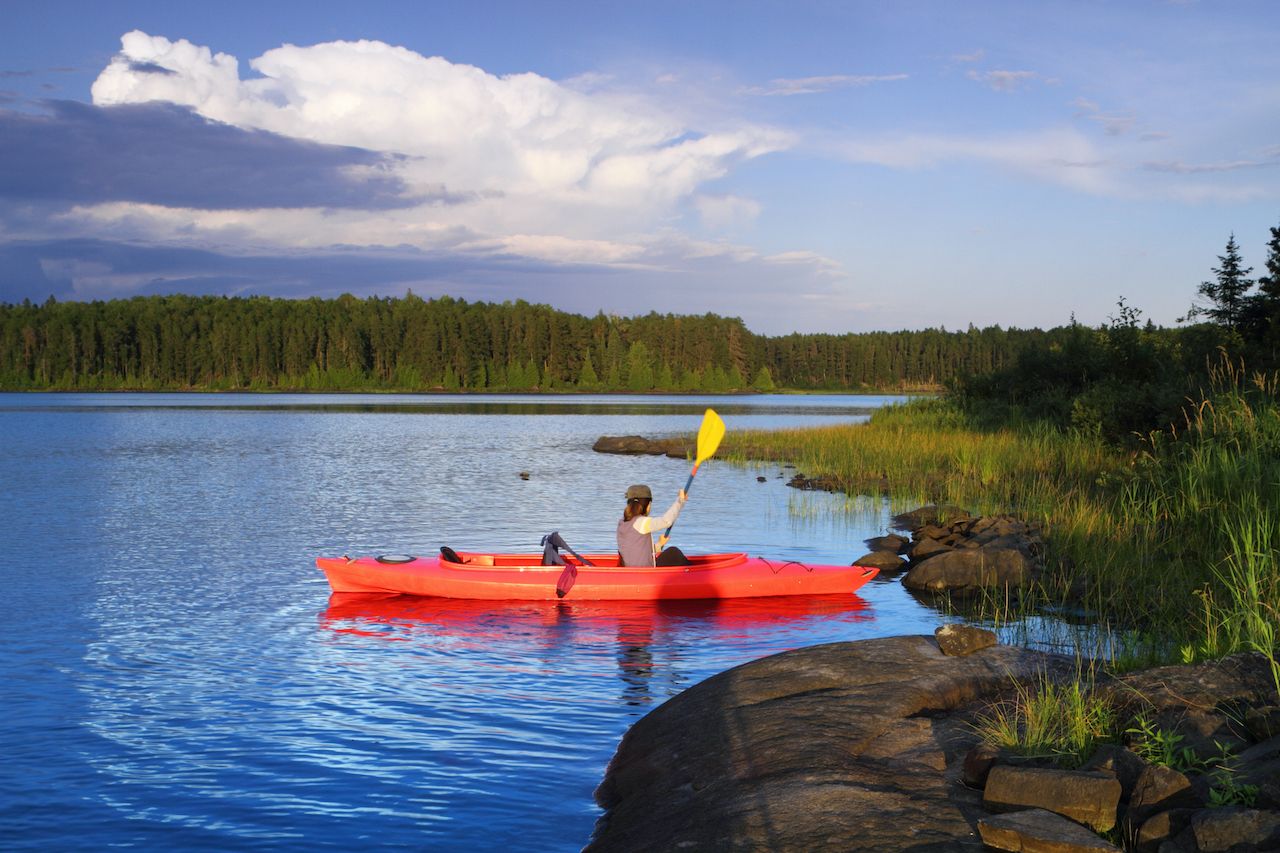 This may well be the most special place for a serene, long-distance trip across the water in North America. Butting up against the border with Canada, the Boundary Waters Canoe Area Wilderness spans one million acres of the Superior National Forest. This massive area has more than 1,000 lakes offering 12,000 miles of canoe and kayak routes.

Since the majority of its 2,000 rustic campsites are accessed from the water — making this the best place to camp in the state — you’ll have plenty of route options. Note that the lakes and waterways are connected via “portages,” meaning you’ll have to carry your craft over to the next waterway. But the effort will be beyond worth it. You’ll camp amid pine, fir, and spruce trees, and as you paddle you’ll catch sight of beavers busily working on their dams or, through the trees, deer, moose, and black bears. The area also has the largest population of grey wolves in the lower 48.

Plan your route ahead of time as there are more than 70 entry points into the area — and you need to pick up a self-issued permit from the kiosks at the BWCAW entrances and go in through the entry point for which you have a permit. Reserve ahead of time in summer. 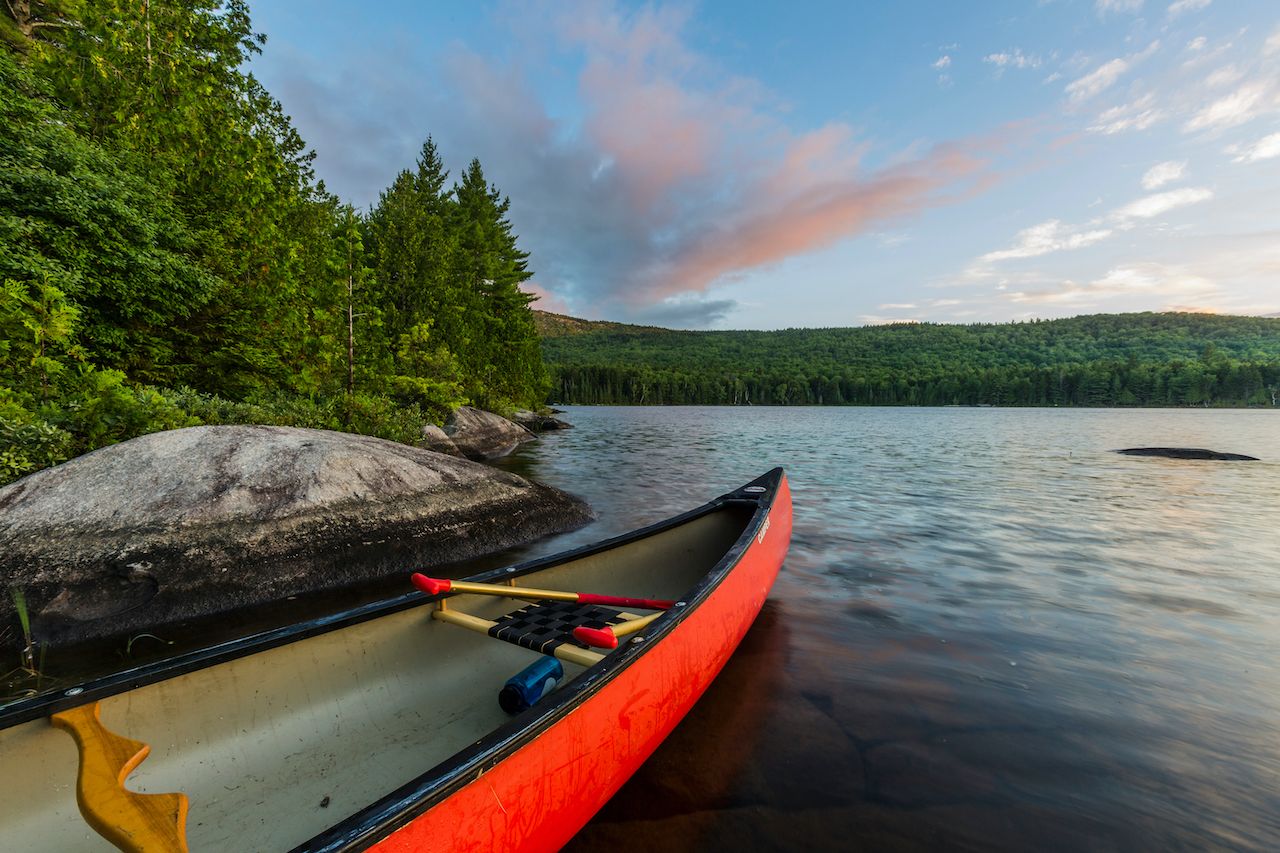 The Northern Forest Canoe Trail (NFCT) is the longest inland water trail in the country, running 700 miles from the Adirondacks in Old Forge, New York, to northern Maine — and encompassing 23 rivers and streams. Established in 2006, it follows waterways used for travel centuries ago by Native Americans and settlers. You won’t find treacherous Class IV whitewater here, but you’ll find everything from fast-flowing rivers to gentle ponds.

The NFCT includes two nationally designated Wild and Scenic Rivers, Vermont’s Trout River and Upper Missisquoi River. Just note that the northern Vermont stretches cross over into Quebec, so make sure that travel is freely open. Another option is to explore the later sections of the NFCT in Maine, where you’ll cross Chesunkook and Chamberlain Lakes, and maybe spot some moose on the banks of the water as well. To help you decide on a routing, check out the trip planner of the non-profit Northern Forest Canoe Trail organization. 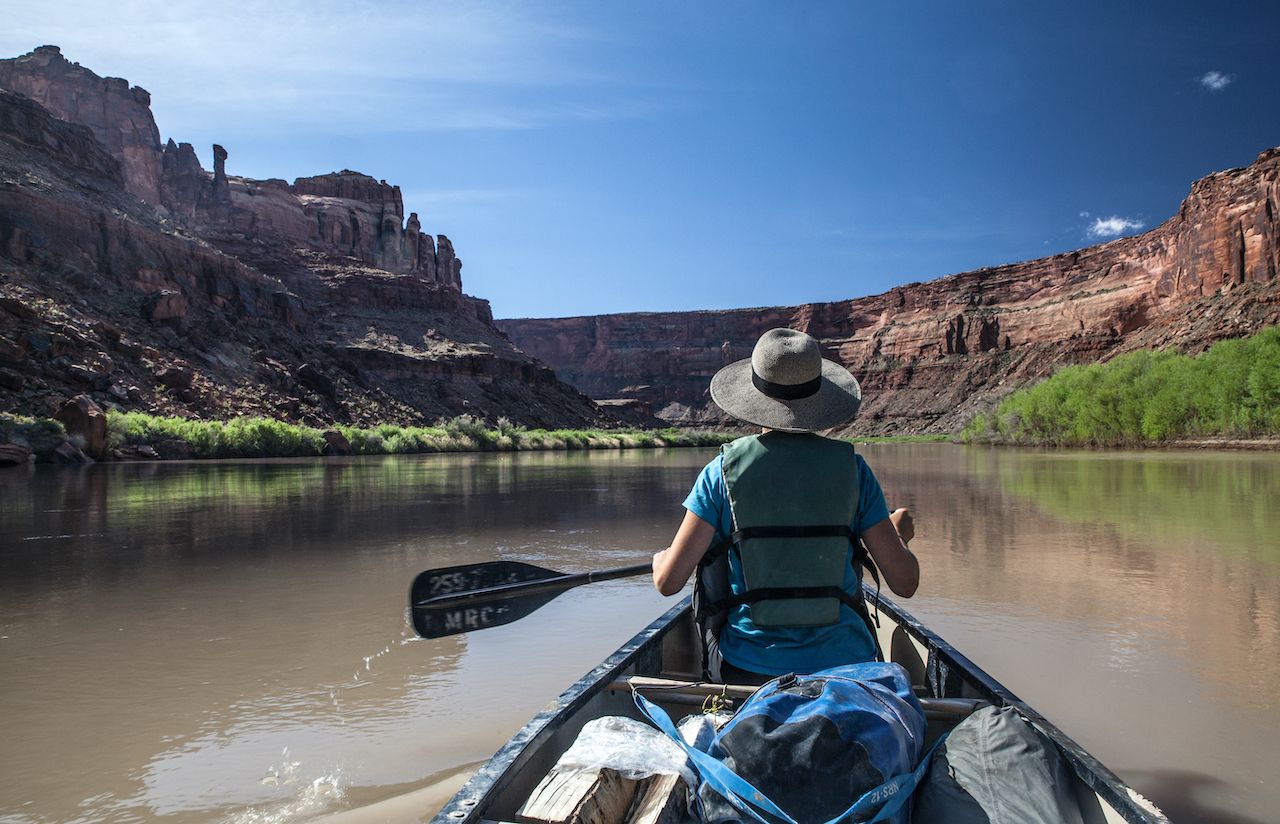 The paddle here is not demanding, but keeping your attention on the water may be. The 120 miles of the Green River traverse through deep, red gorges — Labyrinth Canyon and Stillwater Canyon — and offer vistas of stunning rock formations. If you opt for Labyrinth Canyon, put in at Green River State Park and take out about 50 miles later at Mineral Bottom. As you float over the next few days, the canyon walls get steeper as you go, and in the evening bighorn sheep will come into view. You’ll need a permit from the Bureau of Land Management to traverse the canyon.

While neither canyon gets too crowded, Stillwater is even less visited. If you opt for this canyon, one option is putting in at Mineral Bottom and taking out at Spanish Bottom. You’ll be rewarded with views of red mesas standing guard over the river. As the name suggests, the waters here are always calm, making this a good choice for families. 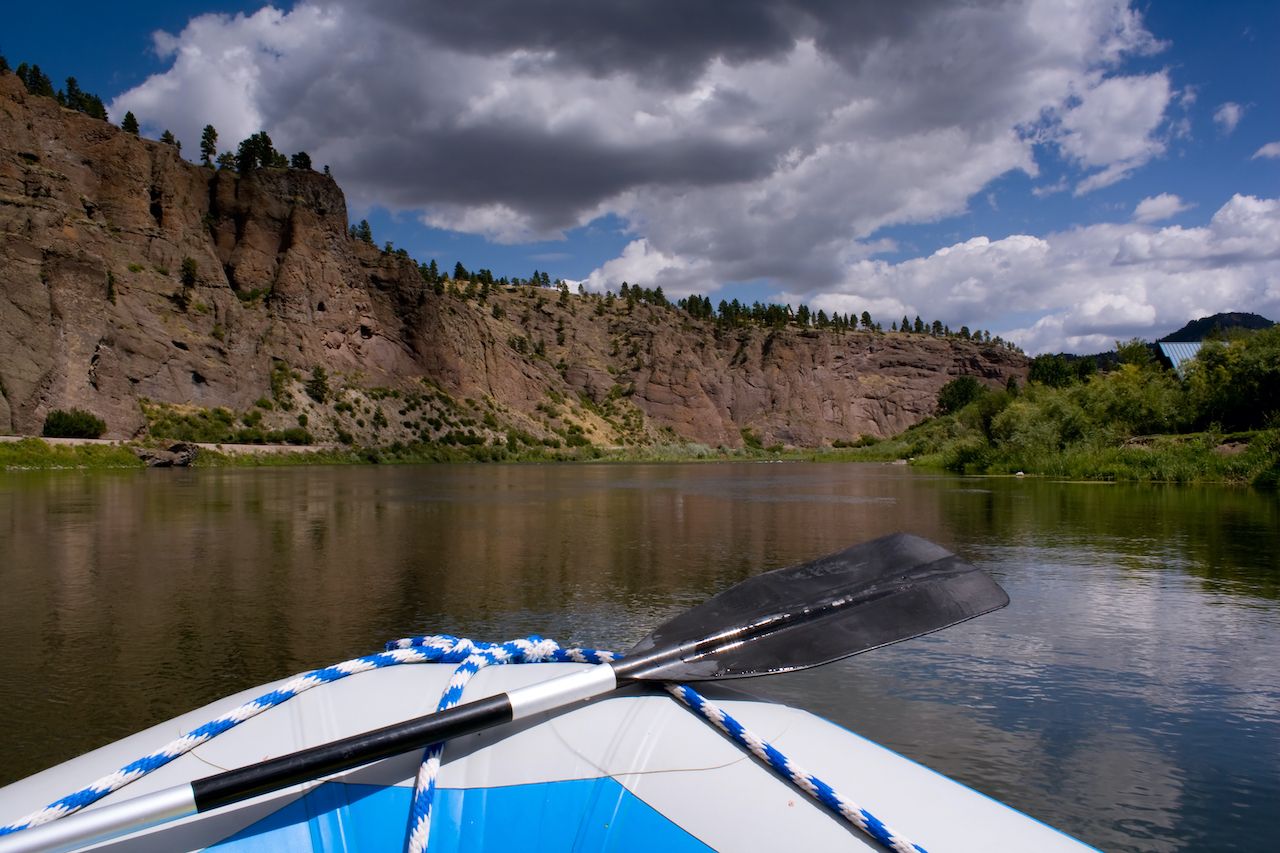 Lewis and Clark explored the Missouri River at the start of the 1800s. While the whole navigable section of this nationally designated Wild and Scenic River runs almost 150 miles, a good area to kayak is in the western half of the Upper Missouri River Breaks National Monument. Putting in at Coal Banks Landing, you’ll paddle by white limestone cliffs and pass prairie lands where you can explore petroglyphs and Native American teepee rings. Animals you may find among the sagebrush include bighorn sheep, elk, and prairie dogs. You can take out at Judith Landing or continue deeper towards the shale bluffs of the Missouri badlands.

In the evening, you can rest at campsites that were used by Meriwether Lewis and William Clark, like Eagle Creek and Slaughter River. Just note that summer storms can form seemingly in no time, causing lighting and dropping temperatures by as much as 50 degrees. 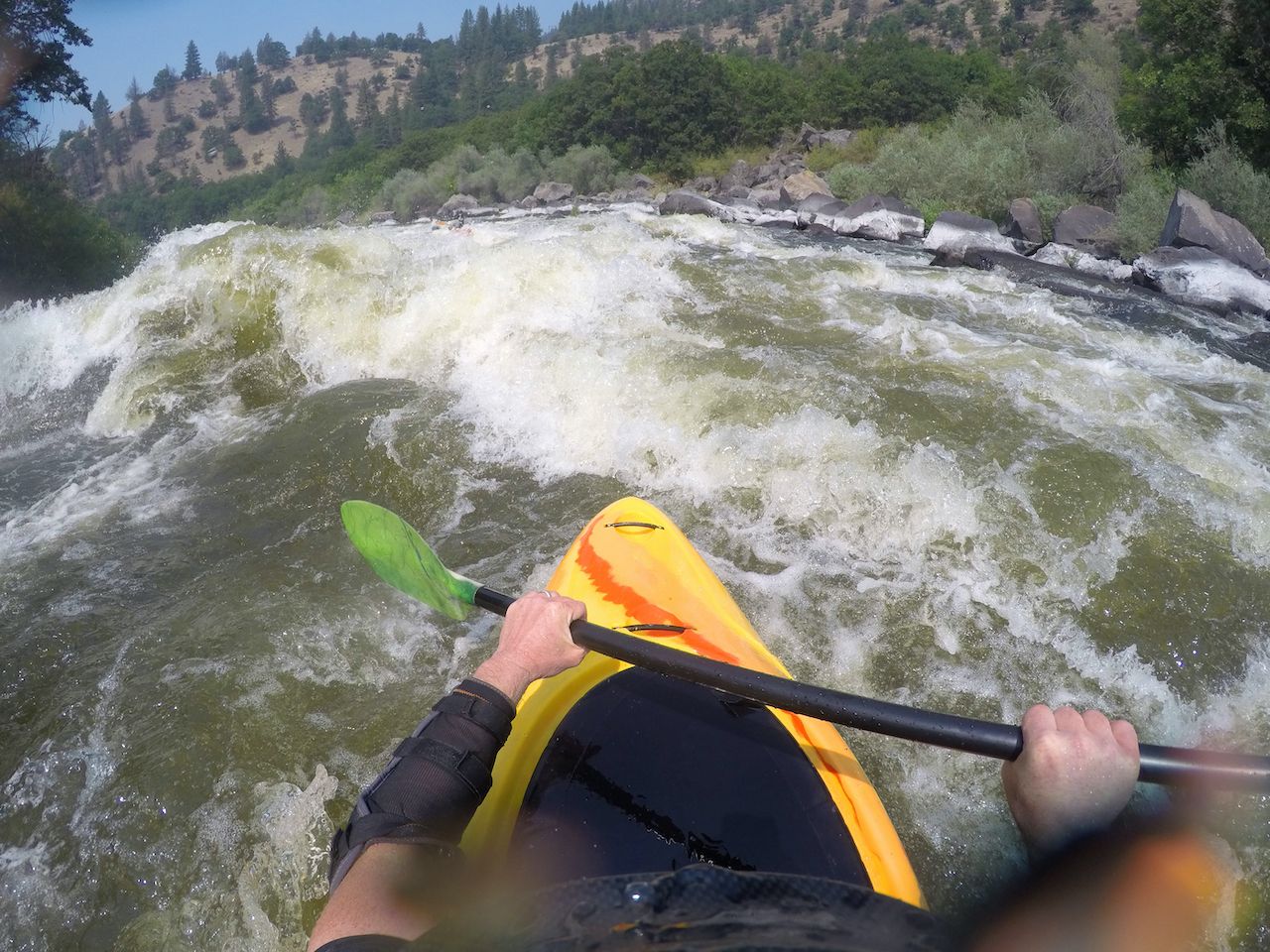 While the Klamath River stretches all the way from eastern Oregon through northern California to the Pacific Ocean, the best place for your kayak trip is in the 370-mile section of river that runs through the 1.7-million-acre Klamath National Forest in California’s far northeast. The stretch from Happy Camp to Green Riffle is for experienced kayakers only. Although you’ll eventually enjoy a gentle float, you’ll also tackle Class II and Class III rapids — making for a good combination of excitement and relaxation.

You’ll paddle in alongside evergreens through the Klamath Mountains, catching sight of turtles or river otters by the water, with deer and perhaps a black bear in the forest behind them, and osprey and bald eagles overhead. Note that if you’re camping there over the summer, you’ll need a campfire permit for dispersed camping. Know how to start a fire and how to put out a fire safely. Also be prepared for regulations banning fires altogether in peak fire-danger season, since you can still enjoy camping without fire. 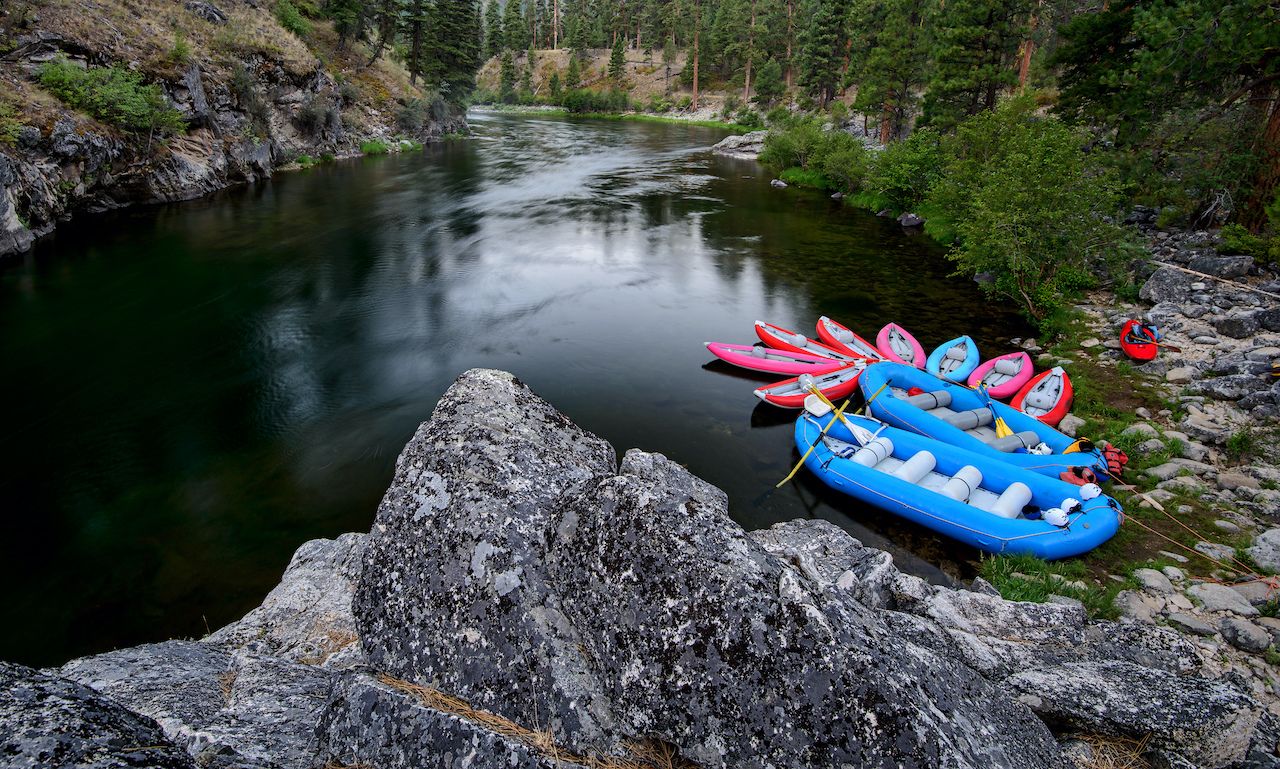 A good choice for kayakers is Idaho’s Main Salmon River where the rapids provide just enough oomph but are still manageable by less-seasoned kayakers — provided you come with someone who has more experience. You pass through some Class III rapids here. The Main Salmon River flows through the Sawtooth Mountains and the over two-million-square-mile Sawtooth National Forest, the largest protected areas in the Lower 48. You’ll pass through deep canyons with evergreen fir trees, spotting moose, bighorn sheep, black bears, and otters.

A classic route involves putting in at Corn Creek and taking out due west at Vinegar Creek or even further at Spring Bar. If the idea of packing all of your camping gear in kayaks that can weather Class III rapids seems daunting, consider going with an outfitter that can take your belongings along in a raft. 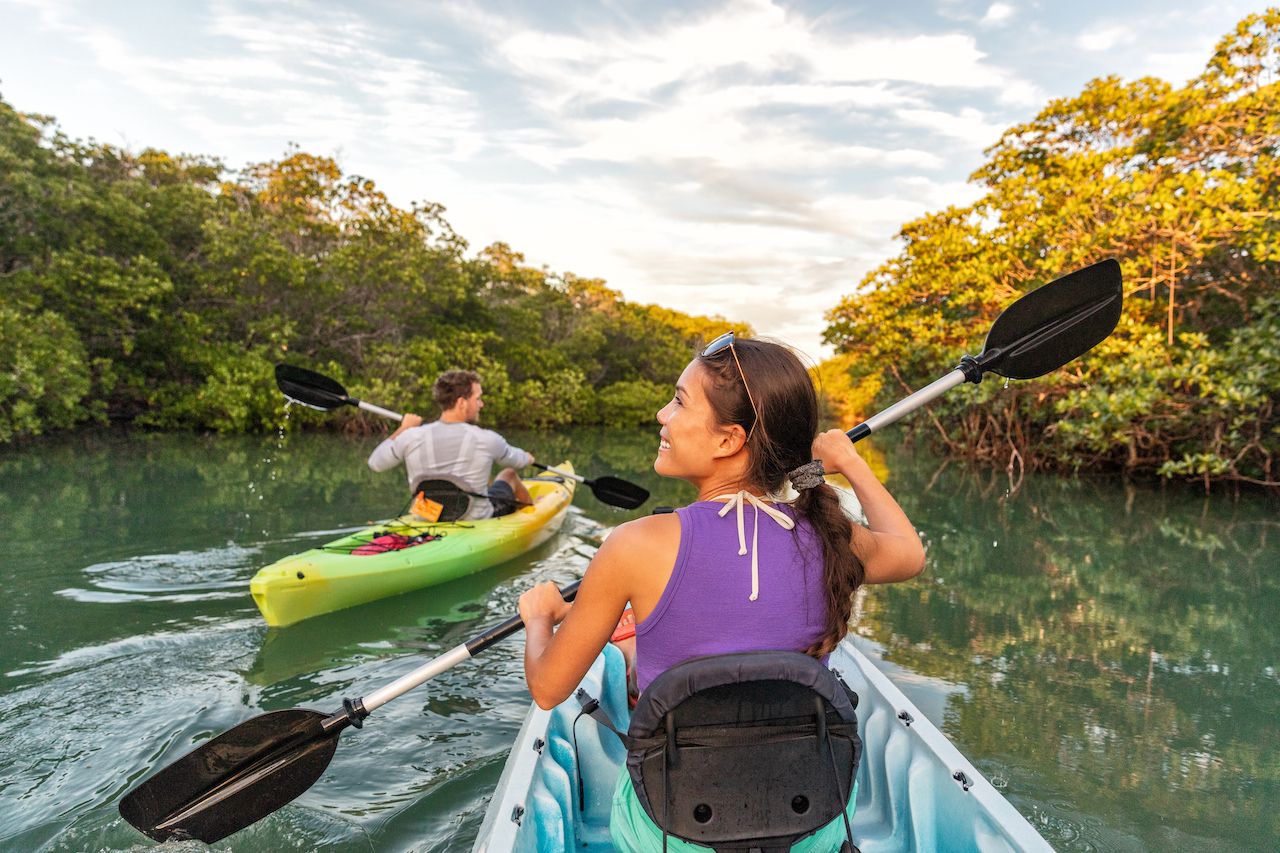 If you’re in Florida and need a break from the craziness right now, you could do worse than grabbing a kayak and heading out to Everglades National Park, on 2,400 square miles of Florida wetlands. Kayaking alongside mangroves, you may spot manatees, dolphins, alligators, and turtles. Hundreds of bird species have been found here as well, among them storks and egrets. A kayaking trip on Florida Bay, with its 10,000 islands, can be spread out for any number of days, and you can camp on the sand at dozens of backcountry campsites. For river and bay locations where you can’t access land, platforms called chickees serve at the campsite area.

You can get permits to backcountry camp at the Gulf Coast and Flamingo Visitors Centers, where you can also check conditions. Note that paddling the Everglades is more popular outside of the hot, humid summer months. If you do go in summer, come prepared with insect repellent.