Most summers, millions of US children head off to spend a week, a month, or the whole summer attending camp, where they’ll enjoy the restorative power of nature, learn new skills, strengthen friendships, and hopefully build upon a lifelong relationship with the outdoors. The problem is, these camps are not representative of the country as a whole.

“Only about four percent of campers in America identify as Black or African-American, even though we make up 13 to 14 percent of the population,” says Angelica Holmes, who runs Camp Founder Girls in San Antonio, Texas. “There are a lot of barriers and gaps in access.”

The camp was established nearly 100 years ago as a “the first historically Black summer camp for girls” and reopened last year under the umbrella organization of Black Outside, which seeks to bring Black youth from San Antonio into the outdoors. 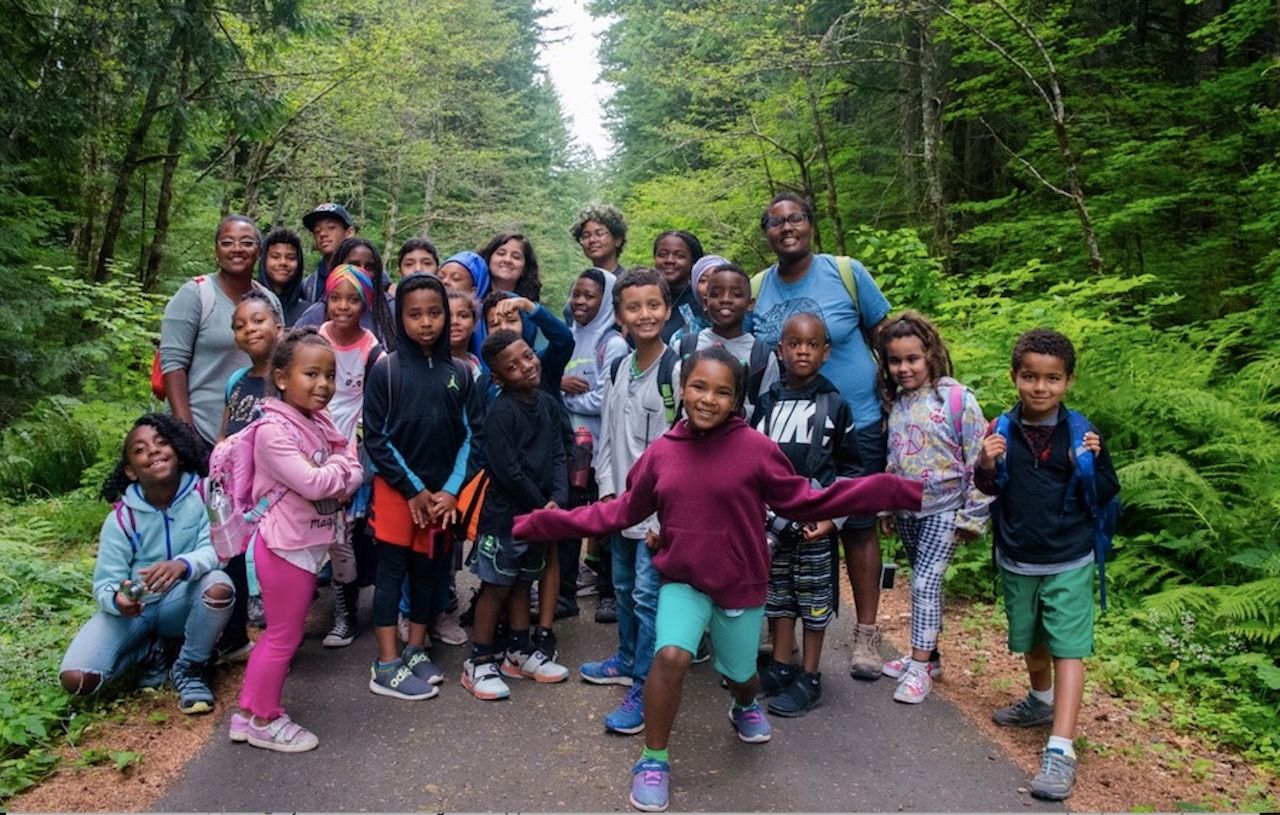 Holmes says that growing up she was fortunate to twice attend camp through her church, funded by a donation. Her weeks at camp were some “really important and really formative experiences” in her life — trying new things, seeing herself as a leader, and pushing herself outside of her comfort zone. Even there, though, Holmes says she felt “othered.”

That was also the experience of Sprinavasa Brown, who co-founded Camp ELSO in Portland, Oregon, which uses the natural world to educate and encourage kids from underserved communities. Brown says that growing up she appreciated camp but was often the only, or one of two or three, person of color there.

For Holmes, Brown, and others Matador spoke to, spending time outdoors is a privilege that shouldn’t be reserved for only a certain segment of the population. They want to make available to more children the benefits that can come from being outdoors and spending time away from home in a new setting. And they want to do this thoughtfully — in an inclusive environment where BIPOC children can find peers and mentors who look like them.

For Holmes, whose camp is primarily intended for girls from San Antonio’s historically Black East Side, one value of Camp Founder Girls is it’s a place where the girls who come to camp can feel safe and be themselves.

“These girls can rarely feel safe and free and giving them that room is really just a powerful and emotional experience … I think a lot of people who are not Black or are not in marginalized groups don’t understand the importance of having a safe space,” says Holmes.

The healing power of nature 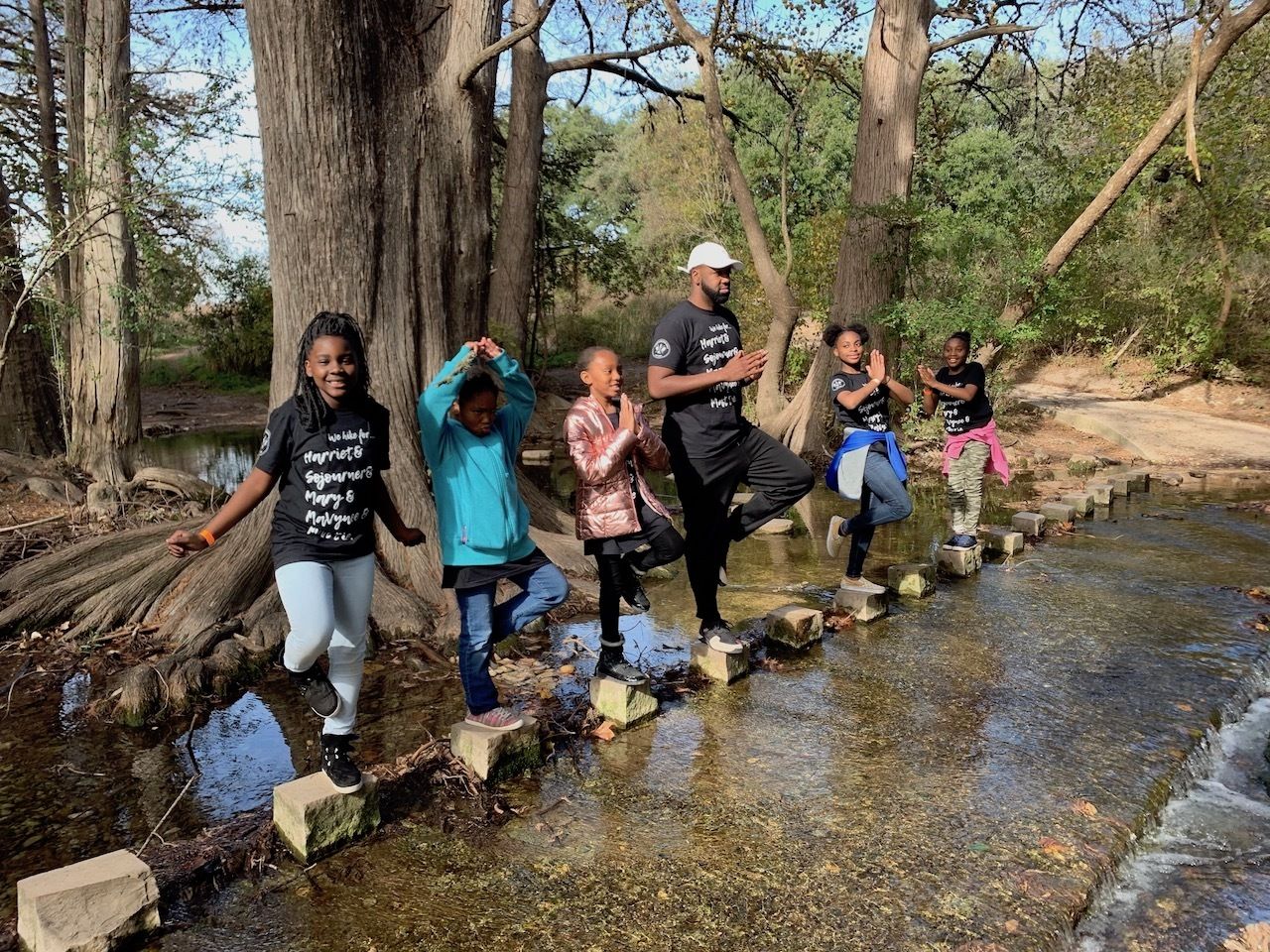 Beyond the feeling of security that the girls can feel when they are together with peers and counselors who look like them, time in nature can improve wellbeing. As Brown of Camp ELSO notes, plenty of studies show that time spent outdoors reduces stress, lowers heart rates, and decreases blood pressure. Brown says Black and Brown youth especially need this relief, yet have fewer opportunities to get it.

Rue Mapp says the healing power of nature is a central tenet of Outdoor Afro, the group she founded to “change the representation and narrative of who gets outdoors and who leads outdoors.” Outdoor Afro is not a summer camp but rather a network of Black leaders and participants in the outdoor space who validate the outdoor experiences Black people are already having and to encourage more of them.

Mapp says that following the stress of the Ferguson situation, where protests over the killing of an unarmed Black teen were met with a militarized police response, she led a hike to the Redwood Bowl near Outdoor Afro’s Oakland, California, headquarters.

“The nature of the Redwood Bowl was healing,” says Mapp, contrasting it to the hard streetscape of the city. “There were no police in riot gear there … That was a moment of clarity for me on the healing power of nature. We laid down our burdens down by the riverside.” 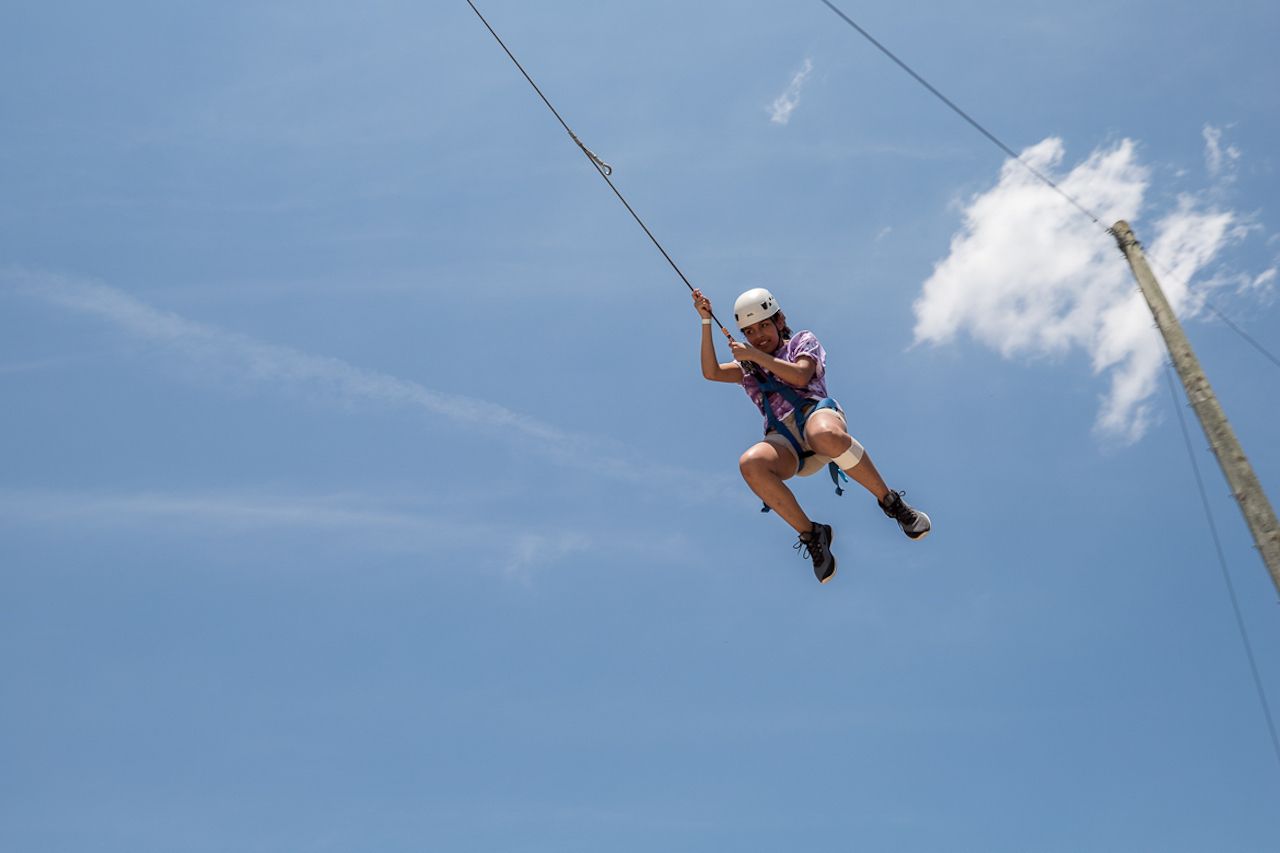 When you feel safe and can savor nature’s curative balm, you can learn and grow. At Camp Founder Girls, the four pillars are strong, brave, creative, and confident. Holmes, who is an educator by training, enjoys teaching the girls that being brave doesn’t mean having no fear, but rather being able to push beyond their comfort zone when they feel nervous or scared.

The girls may challenge themselves on a ropes course, or go on day and night hikes — which Holmes says occur within the context of considering Black history and what hiking meant for their ancestors. The camp last year took place in Texas Hill Country and the older girls went on an overnight hike, sleeping in tents, and summiting Enchanted Rock. For nearly all the girls, these were first-time experiences.

“They may be apprehensive at the beginning, but I love seeing those walls come down. I love seeing them find something that they love … or getting over their fear of bugs and spiders,” says Holmes.

Building confidence was a big part of Dionne Ybarra’s motivation when she created The Wahine Project in Pacific Grove, California. Ybarra grew up in a “classic Mexican family in an all-Mexican neighborhood” about 20 miles inland from the ocean by the agricultural area of East Salinas, California. She remembered outings to the beach as a child where she was taught to fear the ocean. Even though she married a surfer who taught their children to surf, she says she was still “terrified of the water.”

It was only after getting divorced in her 30s that Ybarra chose to face her own fears of the water and learn to surf. But she realized that there were no other Mexican girls in the water, and very few girls at all. She decided she wanted a way to give these girls an opportunity she did not have when she was young.

While at first the focus of her summer and weekend camps was on surfing, today it is more about creating comfort with and a passion for the ocean, so that “no one has to feel intimidated by the sport of surfing.” Surfing could come later, and it has, says Ybarra. 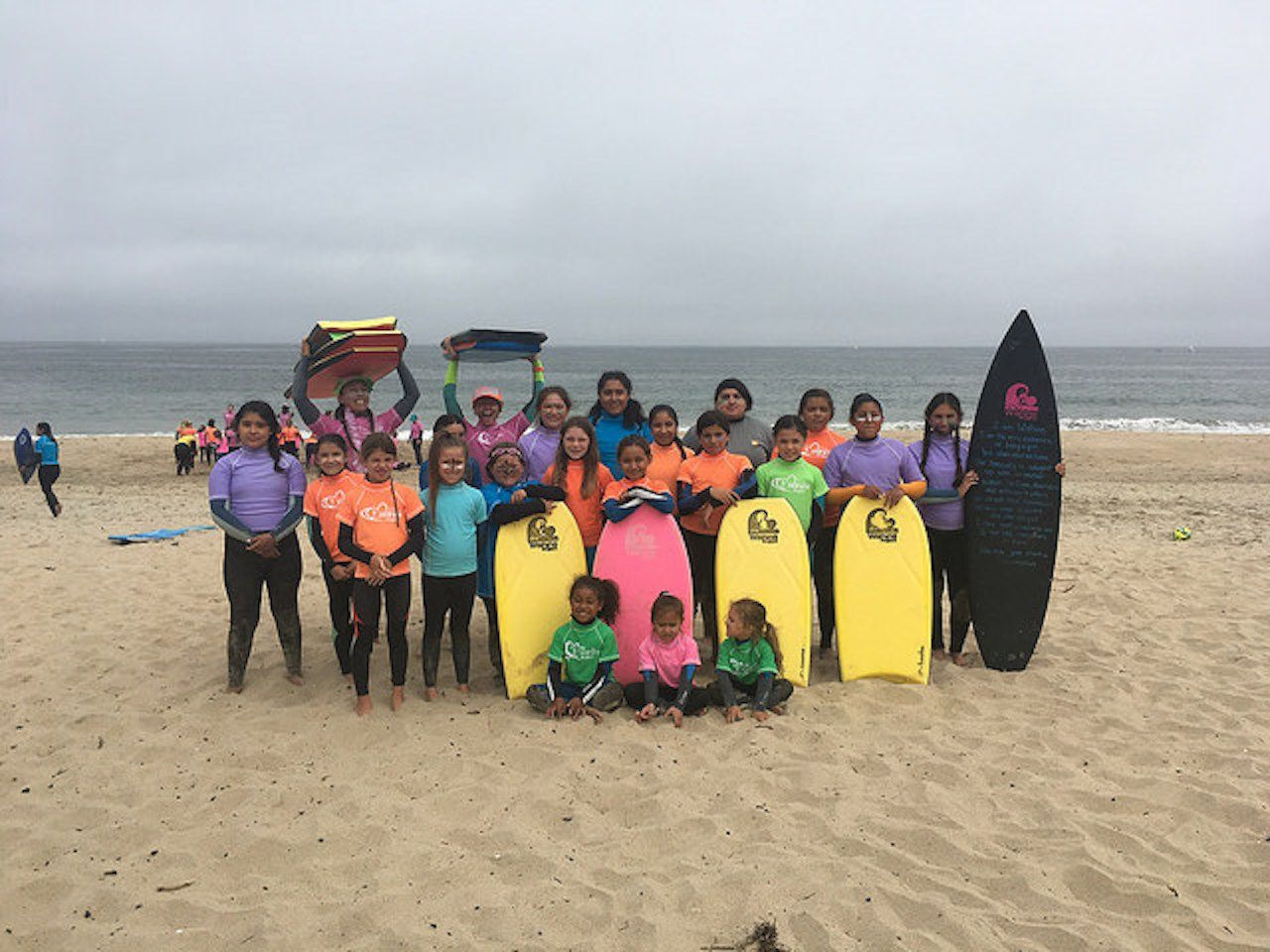 The point for Ybarra, who is now remarried, is to open horizons and to boost self-assuredness through tackling what from afar can look like a daunting endeavor. Surfing, says Ybarra, opens up a world for the Brown kids from East Salinas that “they didn’t know they could be a part of.”

“[Surfing] is glorified in mainstream culture, and they see it glorified, and they see that it looks like one identity,” explains Salinas. She says that when the kids in her program meet their Mexican instructors and stand up on a board, she sees some of them realize, “‘Gosh, I can do that kind of stuff. I can get over this fear. I can move through that fear,’ it shows them that’s just one barrier. And when they can see that, then they can move it over to the next thing in their life.”

At Oregon’s Camp ELSO, the focus is on using the outdoors to learn more about science. Brown says that growing up she was the only girl like herself in her science classes, and that in high school and even in college, teachers tried to discourage her from pursuing her academic passion. When she became a parent, she became even more aware of the limited opportunities to foster BIPOC kids’ curiosity in the sciences, math, or technology. 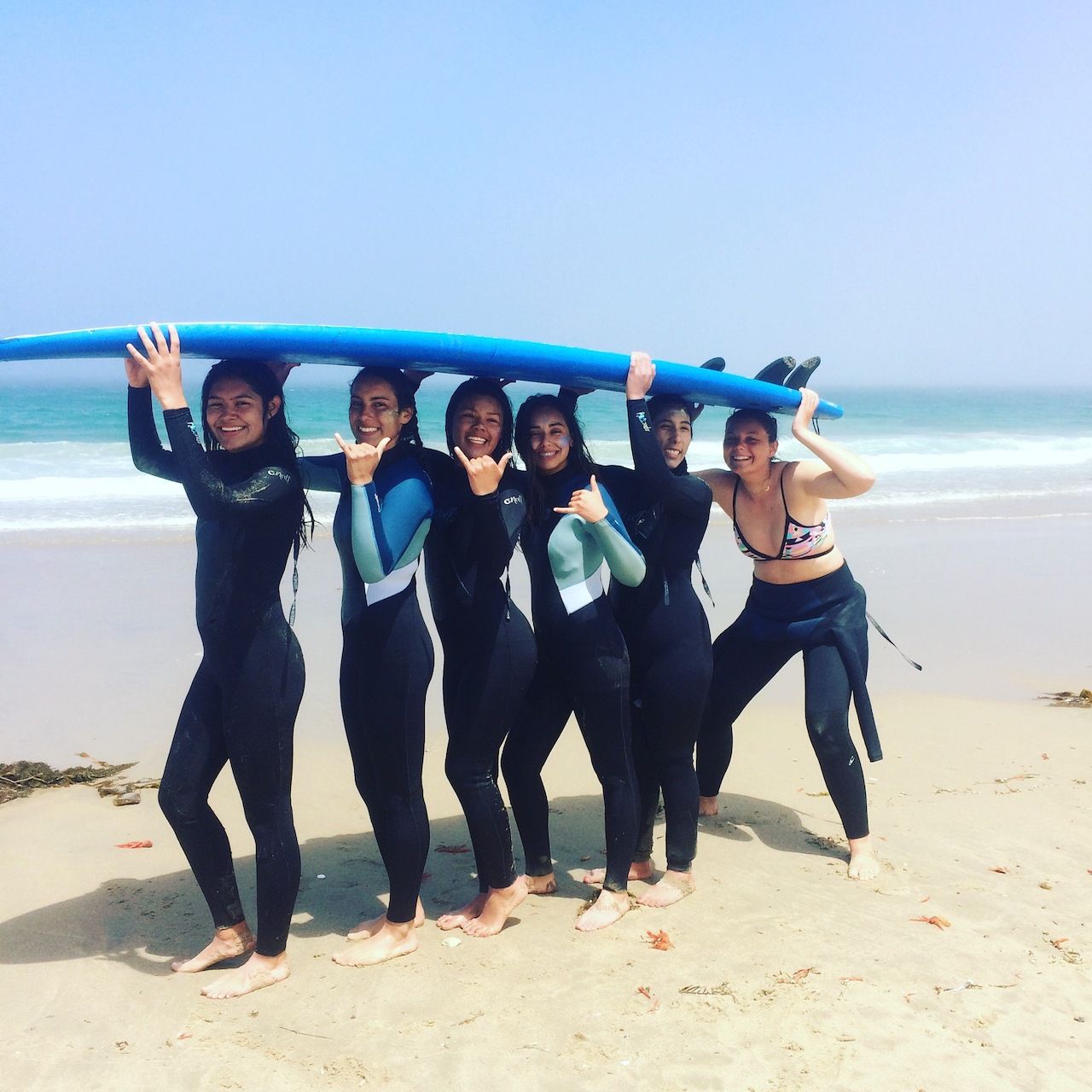 Camp ELSO was founded as a way to address both the lack of opportunities for BIPOC kids to get outdoors and stimulate and encourage a passion for STEAM fields. At the same time, Camp ELSO aims to build environmental stewardship among its participants.

Brown says that while plastic in oceans or droughts in foreign countries can feel very far away, there are very real environmental issues that disproportionately impact communities of color, such as the inequitable placement of toxic landfill sites. Brown spoke of environmental justice, which focuses on the impacts of environmental degradation on underserved communities. This was a concern shared by everyone endeavoring to strengthen BIPOC people’s connection with the outdoors.

“People of color and the Hispanic communities are more at risk for all the negative aspects of climate change,” says Ybarra, of the Wahine Project. But she added that it’s harder to build a connection to nature when the opportunities to do so are “being withheld from them.” When the kids in her program see dolphins and whales and learn about the stresses on ocean environments, they become more invested in taking care of the environment, she says.

These camps all rely on financial assistance to make the camp available for many of their members — offering tuition at a sliding scale or even free access to the program, and making up the cost difference either through donations or through full tuition payments from those families who can afford it.

Camp is just the first step 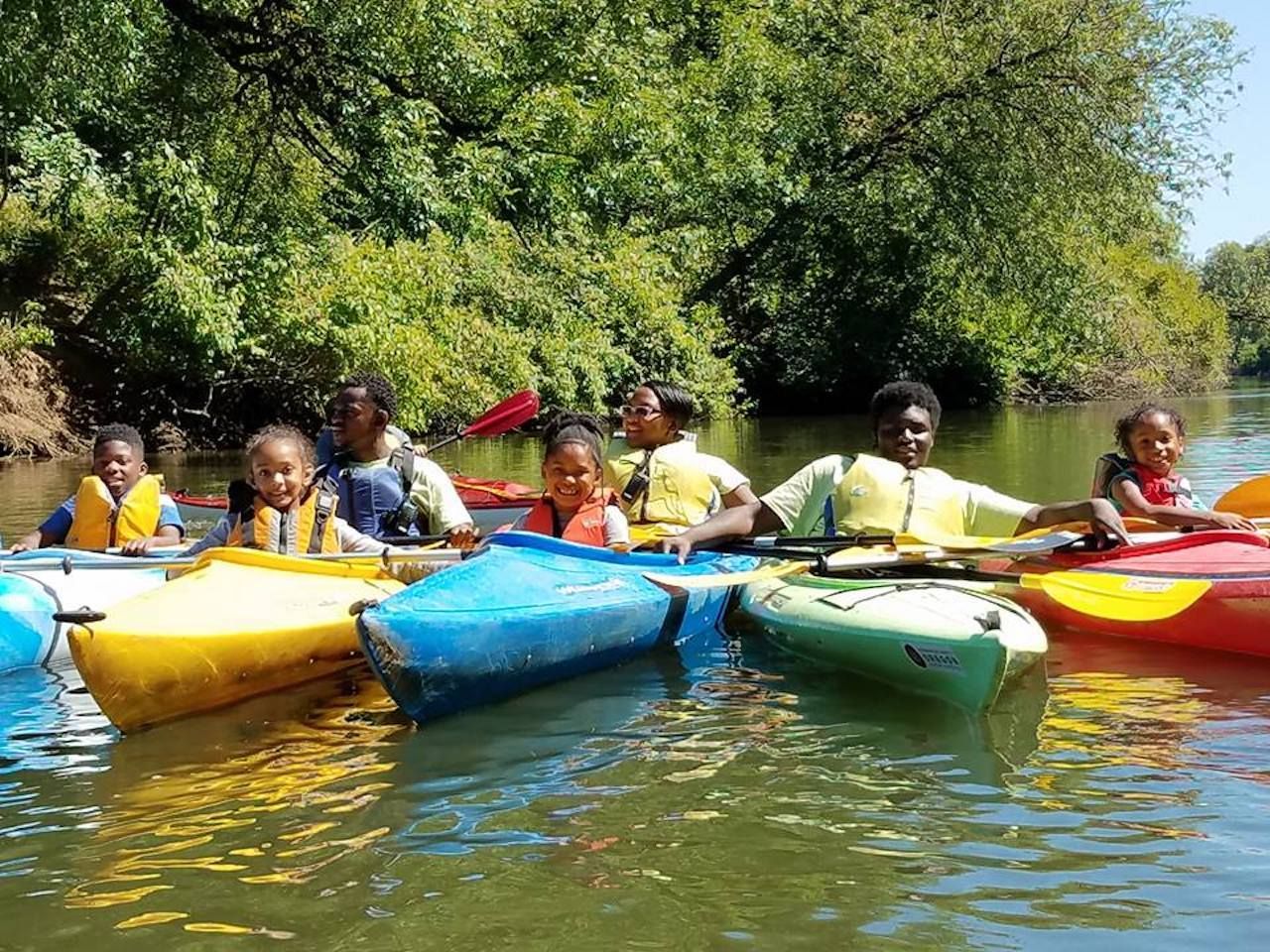 This means that in many cases these kids are coming from family situations where it may be difficult to replicate the outdoor experience once they get back home. And a week out of the year may not seem like enough to change a life. The question then becomes whether a week is enough to set children on a course to embrace and include the outdoors in their life.

For Rue Mapp at Outdoor Afro, the focus on the outdoors has to start with the family and must include and validate the ways that Black people already engage with the outdoors, whether these are tailgating, fishing, and enjoying city parks. For Mapp, success comes when someone participates in an outdoor activity organized through Outdoor Afro leader and then opts to do that again on their own; a prospect that is more difficult for children to do. Yet she concedes that a week at summer camp can be enough to light a spark in kids that will persuade them to include nature in their lives in the future.

And that is just the point of these camps. Brown says she cherished the outdoor aspect of camp, even as she missed seeing faces like hers. Ybarra wishes it hadn’t taken a failed marriage to finally brave the waves she’d seen since she was a child. Holmes says that going to camp as a child was like a fluke; the whole concept was foreign and unknown to her, and yet she is grateful for the experience and its lasting impact. She imagines how much more fulfilling it would have been if her mentors and peers had looked like her.

“I wish I would have had a space like this to go,” says Holmes of Camp Founder Girls.

If these stories are any example, it shows that even a short week outdoors can be transformative. And if not that, it can be a small step along a journey towards environmental stewardship, seeking nature’s healing powers, and reclaiming one’s rightful place in the great outdoors.