In 1975, as the fighting in Vietnam intensified and the event that would come to be known as the Fall of Saigon seemed imminent, Peter Ngyuen’s father fled the city on a boat. He ended up in Seattle before making his way to New Orleans, where he met Ngyuen’s mother and started a family. Today, his son is a thriving member of the New Orlean’s community: Peter Ngyuen is the owner and chef of Banh Mi Boys, which incorporates Creole flavors into the traditional Vietnamese sandwich.

Catholic organizations spearheaded efforts to welcome refugees fleeing the Vietnam War and provide them with a safe haven. In Louisiana, refugees found a hot subtropical climate not all that different from Vietnam and a cuisine that shares an affinity for seafood and spice. In fact, Vietnamese refugees were instrumental in helping invigorate the fishing and shrimp trade. As of 2014, one-quarter of the state’s commercial shrimpers were Vietnamese refugees.

Food has been a bridge between cultures since the Vietnamese community first began to take root in New Orleans. Despite the fact that Katrina devastated the Versailles neighborhood where many Vietnamese refugees settled, the Vietnamese restaurant scene is thriving.

“I just see that, more and more, New Orleans restaurants incorporate Vietnamese flavors, rather than the other way around,” Ngyuen tells me. “They’re using a lot of Vietnamese vegetables, for instance.”

“Nobody has really modernized the banh mi,” Ngyuen says. “There were already a bunch of pho places around here and I wanted to focus on the bahn mi, and at that time, it was secondary.” 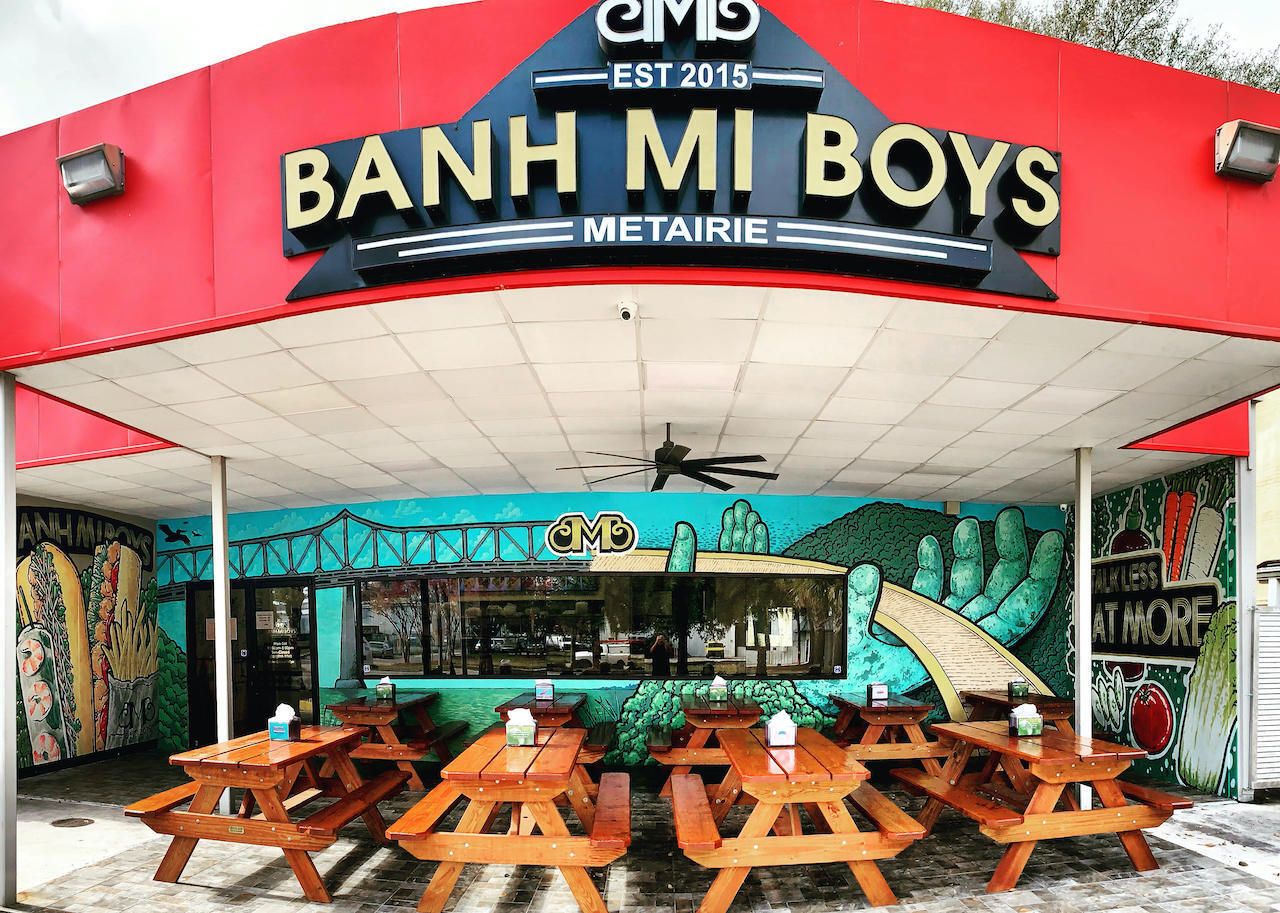 For Ngyuen, Vietnamese and Creole cuisine are an obvious match. There are similarities in climate, flavors, and ingredients — especially when it comes to spice, garlic, and seafood.

“Both were French colonies and both are river deltas, both have a lot of brackish water seafood, [and] the growing seasons are very similar,” adds Michael Gulotta, a New Orleans native and chef at Mopho, which is focused on pho, the ‘“po-mi” sandwich, and curry and vermicelli bowls with a distinctive New Orleans twist.

In his po-mi sandwich, for instance, the protein is a New Orleans staple — fried shrimp, oysters, spicy sausage patties — but the vegetables and garnishes are all Vietnamese, from pickled vegetables to mint, clinato, cucumber, and jalapeno. In addition to incorporating the obvious seasoning to Southern dishes, like lemongrass, chilis, and ginger, Gulotta has learned how to incorporate ingredients that might not be as familiar to newcomers to Vietnamese cuisine.

“So much of South Louisiana’s food is seafood, so we use fish sauce in lieu of salt a lot,” Gulotta says. “Another fun one is fermented black beans. We do a gumbo that we’re pretty well known for, and we use fermented black beans in it, and it adds this whole other layer of richness.”

At first, New Orleans residents were skeptical that Vietnamese ingredients have a place in Creole cuisine. Ngyuen says that, when he opened in 2015, many of his first customers had never tried banh mi before. It became part of his job to “educate” people on traditional Vietnamese dishes, he says, a sentiment that Gulotta also echoes.

“We ended up being the gateway drug to Vietnamese food for people who had never had it before,” Gulotta says. “People would come in and say, ‘Why is there this meat spread on my po boy,’ and we would say, ‘That’s the pate, it’s very traditional.’ And people would be like, ‘We don’t want that.’

“The landscape has totally changed,” Gulotta continues. “When we opened six years ago, people thought we were nuts. And now a lot of restaurants have adopted the same approach.”

Vietnamese cuisine has become so popular in New Orleans that it’s even found its way into the crawfish bowl, a distinctly Cajun dish from southwest Louisiana and Houston, Texas. The cuisine in New Orleans, on the other hand, is Creole, an entirely different food tradition that has nonetheless fully embraced the Viet-Cajun crawfish.

“Everyone always equates New Orleans with Cajun, and we’re not,” Gulotta explains. Still the trend is undeniable. “Vietnamese restaurants have started doing [crawfish] here because people started hearing about it from Cajun country, so now people are like, ‘We want Vietnamese crawfish,’” he continues. “There are now a bunch of Vietnamese boil houses that have opened up in the last six years.”

Spots like Big EZ Seafood, which originated in Huntsville, Texas, and now has a location in Gretna, Louisiana, just 10 minutes outside the city, is one of the leaders of the Viet-Cajun food movement, which has since exploded in popularity.

The blending of Vietnamese and Cajun cuisines isn’t limited to the Gulf Coast, either. Mike Khuu, chef and owner of Pho Bar and The Boil, which has locations in New York and New Jersey, visits New Orleans twice a year. On a visit a decade ago, a friend invited him to a crawfish boil, and inspiration struck. He knew he had to bring this backyard tradition to the East Coast restaurant scene — but he wanted to give it an unmistakable Vietnamese twist.

“The boil [was] created out of that fusion — Cajun and Vietnamese,” Khuu tells me. “We add some garlic powder, we add a little lemon grass, and celery sticks, and a little bit more citrus.”
Though chefs like Khuu are in the business of reinventing classic New Orleans cuisine to make room for the vibrant, bright flavors of Vietnam, he thinks the best Vietnamese restaurants in the city are focused on classic dishes typically cooked at home.

“A lot of the Vietnamese restaurants that are in New Orleans are mom and pop shops,” Khuu says. “That’s what makes the food so enticing in that area. The food never changes, so you get history and culture.”