Data can be startling, particularly with regards to destruction. Wildfires, responsible for the burning of more than 10 million acres of open land in the United States in 2015, are a massive problem that is only amplified by climate change, habitat ruin, and an increasing number of people recreating outdoors. Even more shocking is that a full 84 percent of wildfires are caused by humans, according to a University of Colorado study.

Here’s another banger, this time from the Insurance Information Institution: From January 1 to June 2, 2020, there were 19,762 wildland fires in the US. Over the same period in 2019, that number was significantly lower — 14,969 wildland fires — which still seems like a lot given how easy it is to not start a fire.

Sitting around a campfire is one of the most satisfying parts of spending a night in the woods — the food, the songs, the awkward stories that you half-believe. Huddling in the dark just isn’t the same. But not completely extinguishing the fire before going to bed is the easiest way to ruin camping for everyone.

At the risk of sounding too much like Smokey Bear, come on, people.

First, don’t start a fire when you shouldn’t

Before we discuss how to put out a fire, note that there are times when you should never start one. The most obvious is by not tossing your cigarette butts on the ground. And remember that hot ashes from cigarettes and other smokeables can start a fire. In fact, cigarettes are the number one cause of death by fire in US homes. Besides that, cigarette butts are trash, and should be disposed of accordingly.

Second, fire bans — including fireworks — are there for a reason, and that reason is not to specifically hamper your fun. If a fire ban is in place, that’s usually because experts have determined that weather and brush conditions are too dry to have one; you could be camping in one big tinderbox.

We can hear some of you saying, “Liberty uber alles! If I want to start a fire or blow up cheap combustibles to produce a really loud noise, the guv’ment can’t tell me not to. It’s tradition!” Thing is, yes it can. Hark the current COVID-induced, mask-wearing situation. Your liberty guarantees you the right to freedom of movement, choice, and action — as long as no one else is endangered by your decision-making.

The website Fire Restrictions notes all current fire restrictions in the US on a handy map, making it easy to note whether you’ve selected a campsite where a fire is permitted. When campfires are allowed, put it out completely before going to sleep. Here’s how to do just that.

How to properly put out a campfire 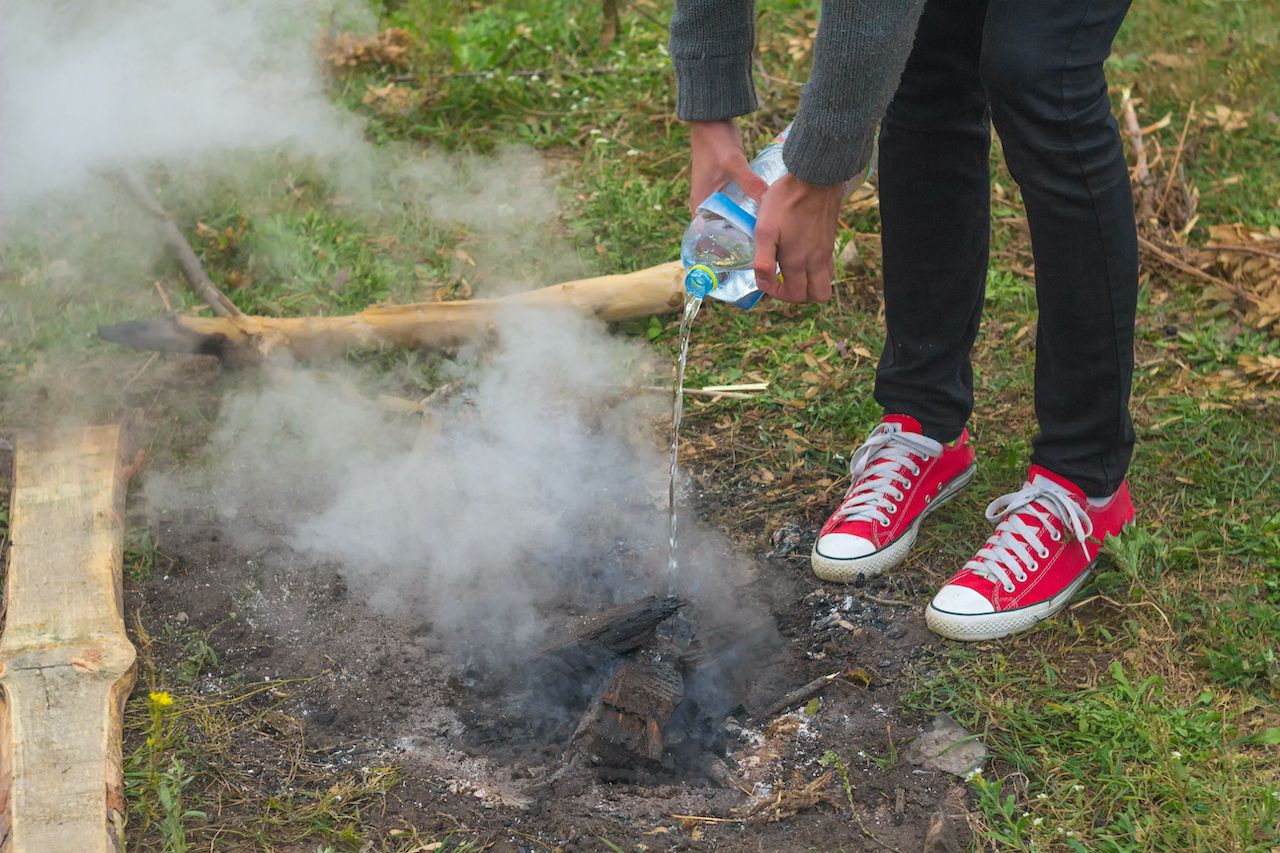 This is the straightforward part. Apply ample water to the fire ring, even if the fire is dwindling down to embers. When you first apply water to the campfire, there will be smoke and sizzling. You’re not done applying water until both have stopped. If you don’t have enough water on hand to complete the task, take a bucket, bowl, or set of cups down to a nearby stream or lake. Cheap light beer is pretty much water, so yes, that also counts.

This task can be given to the person who didn’t do any of the work involved to cook dinner. Grab a few handfuls of dirt from around the fire ring and add it to the embers. Then, take a sturdy stick and stir it around to create a sort of earthy broth. Everything in the ring should be dampened, creating a pile of debris that’s as appetizing as the first time you laid eyes on a bowl of oatmeal. 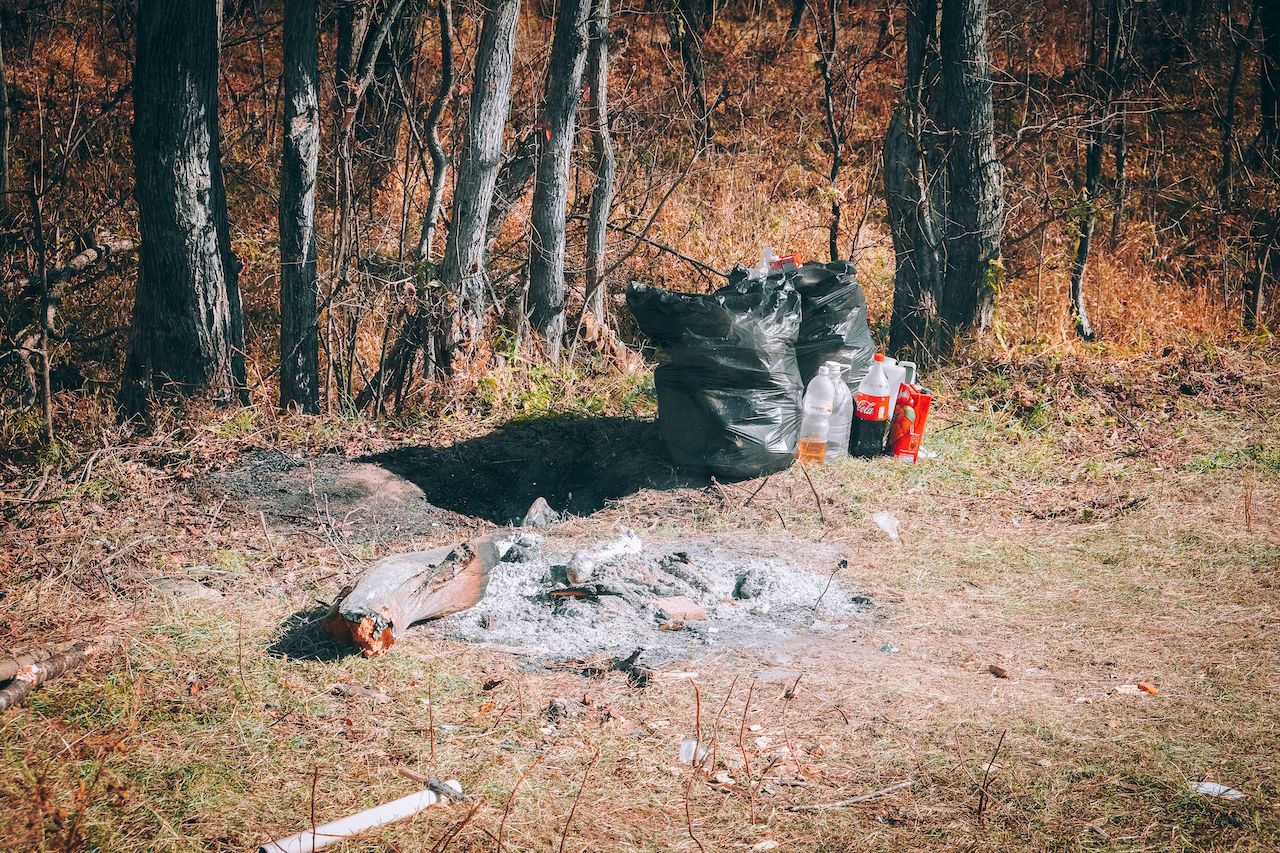 The remnants of your fire should be cool to the touch. Not necessarily cold and uncomfortable, just tepidly chilled. Add a bit more water just for good measure.

Now that the fire itself has been extinguished, walk around the campsite and its surroundings just to make sure there are no loose sparks. This gives ultimate peace of mind before embarking on the daunting task of properly arranging yourself for a semi-comfortable night’s sleep. It’s also a great opportunity to locate any belongings that may have been scattered by wind or a rowdy fellow camper.